Quenneville Returns to Chicago, Unleashes His Panthers on Blackhawks 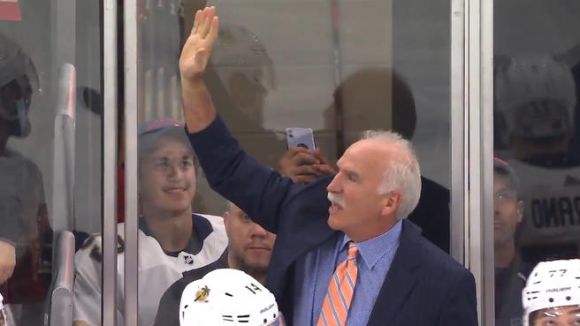 The Chicago Blackhawks' decline and fall from their recent glory years -- three Stanley Cups in five seasons -- was definitely not down to Joel Quenneville.

The GM's responsibility is to manage a salary cap, and the coach works with that result. Or tries to.

Suffice to say Quenneville was given ingredients, but not even Gordon Ramsay was gonna make chicken salad out of it.

Hawk fans knew the deal, and the vast majority stood with Coach Q all the way.

They definitely let him know it when he returned to Chicago with his current club, who even more definitely knew what he brings to the party by awarding him a 5-year, $30million contract.

As if this needs pointing out, some of the fans are chanting, Q!

Full marks to the Blackhawks, too, for taking a moment to recognize what Quenneville meant to the franchise. Of course, the players always knew.

During the first TV timeout, their tribute video went up on the arena screens:

That happened during the game for a decent reason, too.

Patrick Kane was honored before the puck drop for scoring his 1000th point:

Quite the night for current and past memories.

Not to forget why everyone happened to be in the arena, it was also a perfect example what Quenneville can do when given the tools to legitimately compete.

He's resurrected the moribund Florida Panthers franchise, and his work was on display in their 4-3 triumph:

The names have changed. The uniform's clearly different. The Q system is on full display, though.

It's put the Panthers on a fast track to this spring's playoffs, too.

When the Blackhawks players aren't on their way back from the golf courses after the regular season's over, maybe they'll tune in to watch.