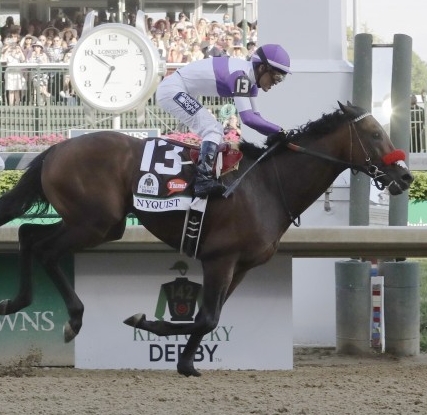 Quick, what is the biggest horse race of the year?

Well, look at that: almost every one of you said the Kentucky Derby!

You don't really even follow horse racing, and yet, you knew the answer.

Look at you ... Congratulations.

And look at who raised the Cup pranced to the winner's circle!

Let's see that again on replay:

No wonder the horse was named after that dude!

All that was missing at the end was an octopus.

Have you ever wondered how a horse gets to be in the Kentucky Derby?

You probably think that all the top ponies get together in Louisville the first Saturday in May and hang out. You know, the best of the best.

That's they way it is in other sports. Right? Winners advance and losers go home.

Horse racing is a bit different. If you don't earn enough qualifying points, you just buy your way into the big race!

Yep, its that easy.

Lets take a look at this years race:

Trojan Nation broke from the No 1 post position and went off at 50-1.

Did you get that? He's never won a race! Nope. Never.

He's started six races in his career, and what does this fine equine have to show for it?

What if the Cleveland Cavaliers were 0-6? Would they be in the biggest race of the year?

Point is, if you zero at anything in another sport, you probably don't belong in your sport's biggest event. Only three non-winners have ever won the big race:

Here's the catch, though:

His confidence should've be at an all-time high for the 142nd Run For The Roses.

Now, your humble -- but still angry and still white -- reporter lives in Lexington, about 85 miles from Louisville, so he surely must know everything there is to know about horse racing.

Well, here's a sure thing: the Preakness is in two weeks, and only one horse in the field has a shot at the Triple Crown.

And Gustav Nyquist is doing a hell of a job for Sweden in the World Championships.