US Open: Woodland's Approach to Pebble Beach Earns Him a Championship 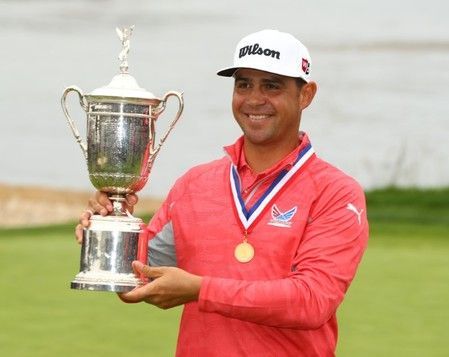 Dude isn't fooling himself. He knows why he's on the PGA Tour.

By his own recognition, Gary Woodland's a bomber.

To date, though, being known for moonshots off the tee offers a clue why he's only picked up a winner's paycheck only three times in his eight-year career. So ...

This weekend, the Kansas native proved to himself and the golfing world he's more than that.

Golf's Slam events are notorious for constricting fairways in one form or another, and the US Open at Pebble Beach was no different.

The first cut was enough to limit the accuracy of approach shots, and the second cut did its bit to affect both distance and spin.

If any player known for having a cannon got that message, it was Woodland.

It's not a stretch at all to say dude's quality and consistency in his approach shots won him the US Open. He stayed outta enough trouble to keep drama on the greens at a minimum.

His second shot at the 14th, which most likely sealed the deal for him, underscored this with an exclamation point:

That's how to bomb when distance comes in handy, and the middle of the fairway was the launch pad that made it possible.

Woodland's control game left him a tad short on the 17th, so just as he took his teebox power to the fairway, dude displayed his short clubs on the green:

Gary Woodland nearly holed the chip from ON THE GREEN! #USOpen pic.twitter.com/IWGxmVouf4

He saved one of those to serve as icing on the cake:

WHAT A WAY TO FINISH!

When those occasions arose, he was mentally fresh and technically ready, doing what was necessary as his pursuers fell by the wayside down the stretch:

Now that Woodland's finally had his day in the sun, his task is to build on it.

The same sorta game would do him proud at the British Open over in Northern Ireland in July.

Elsewhere in Round 4, entertainment was where you found it:

It's not often one of Jack Nicklaus' records falls by the wayside, but it happened here.

Norway's own Oklahoma State Cowboy, Viktor Hovland, did the weekend at 69-73-71-67=280, which beat the Golden Bear's 282 as the top amateur scoring record in the US Open.

Viktor Hovland is in the clubhouse with the lowest 72 hole score by an amateur ever at a #USOpen. pic.twitter.com/p7efkhn9jf

Next time out, dude wants to get paid for his efforts. He's going pro this coming week at the Travelers Championship in Cromwell, Connecticut. That's part of the Greater Hartford area.

Woodland's taking a pass on it. After waiting until he was 35 to capture a Major, he deserves a bitta extra time to savor it.