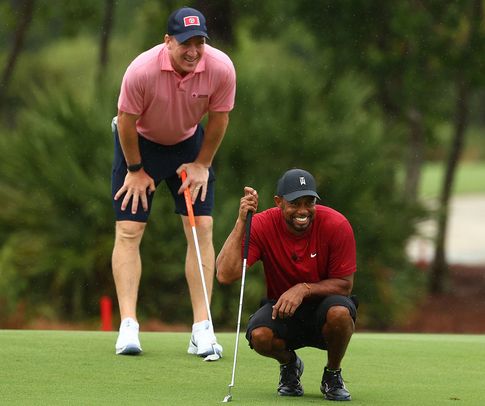 One of the cooler aspects of the professional golf tours is their baked-in ability to raise mega-dosh for charities.

Every tournament is hosted by a not-for-profit organization that designates a noble cause and then donates their neet proceeds to it.

Coming into this season, the PGA Tour's all-time total stands at over $3billion raised.

Now, the special made-for-TV event that was Tiger vs Phil II plus friends has also added to the greater good.

As opposed to what is now Match I where Phil Mickelson nicked the winner-take-all purse of $9million by nipping Tiger Woods after 22 holes, the enhanced sequel collected a whopping $20million for Covid-19 relief.

Putting it mildly, their playing partners more than stepped up for the occasion, just as they'd done during their entire NFL careers.

Peyton Manning did his bit to help Tiger put the finishing touches on their 1up victory:

And Tom Brady provided the highlight shot of the day:

However, as an indication of how the day went for Brady and Phil, that hole-in was only good for halving the hole.

Amazingly, that was the only real wardrobe change on the day, as the quartet weathered a steady rainfall to do their bit for the show and its ultimate goal of combining their sponsors' $10million donations with viewers' contributions.

They did all of that: Where Match I was virtually all-business, this one featured enough entertainment to keep even non-golf fans tuned in.

There were stories, banter, in-match comments from the likes of JJ Watt and Brooks Koepka, and of course, a lively dose of smack from Charles Barkley:

Brady had his share of duffer's moments, but when he scored, he did it big for the charity. That shot at the seventh hole, for example, cost Koepka a $100,000 donation.

The format had the teams doing best-ball on the front nine and a kinda-sorta alternate shot arrangement on the back.

Mickelson and Brady took advantage of the latter at the par-4 11th, when Lefty launched a bomb ...

Phil goes over the tree line and drives the green on the par-4 11th. 🚀 pic.twitter.com/Knib2gL8lx

... and Brady went side door to can the eagle putt:

The sponsors' side challenges were in the spirit of the moment, too:

Ultimately, Tiger drained the putt that followed a solid lag that won the match and gained a measure of relief himself by finally stifling Phil's crowing over his Match I victory:

Tiger’s putt for the win 🔥#CapitalOnesTheMatch

All in all, it was an entertaining -- and fulfilling -- day. Match II was an unmitigated success by virtually any measure, and it's sure to feed demand for a Match III sometime next season.

Hopefully, the need for Covid-19 relief will have passed and another worthy cause can be the next to benefit. With the sorta show Tiger, Phil & Co staged today, odds are their good will serve it well, too.