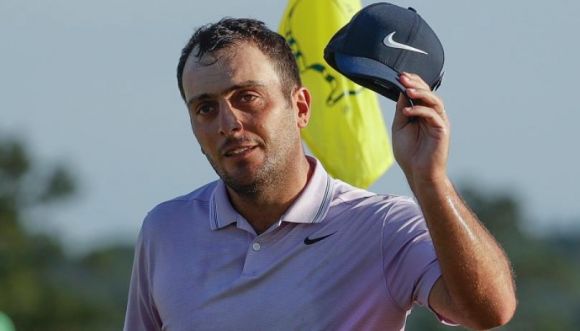 The final round at Augusta is gonna be a Sunday like no other.

Due to a storm being forecast in the afternoon, the OGs who call the Masters shots have decreed that:

This could set up some seriously sudden leaderboard shifting.

Who knew April humidity would soften Bobby Jones's legendary course to the point that a full-on attack would offer so many scoring chances where such gambits would usually send challengers down in flames?

That performance was good enough to put the stoic Finau into Sunday's final trio along with his boyhood idol, none other than Tiger Woods.

Dude also had himself a day, especially closing out holes when he was within 8-10 feet:

Being 11-under after three rounds is a proud accomplishment amid the azaleas, but all that's done so far is keep them within two shots of golf's version of Pepé LePew, British Open champion Francesco Molinari.

The Italian metronome is at it again:

As at Carnoustie, Molinari and Woods were paired together, and Europe's Ryder Cup hero outplayed the holder of 14 major titles to emerge victorious.

The crowds at Augusta have already shown a strong vocal preference for the Tiger, but Molinari seems to block all that -- and the pressure that goes with being the leader -- outta his mind.

Woods is now 43 and hasn't won a major in 11 years. He notorious battles with putting since his comeback still lurks in the background, and that may well yet prove to be the fight that determines the outcome here.

Finau, like Molinari, seems to be a master of concentration out there. It could well be that the lightning-round format of threesomes everywhere in a short period of time will further help to keep him in the moment.

Then there's Molinari. Dude's shown enough in the past year that he's unlikely to beat himself.

He's truly into the task at hand, no matter what's happening around him.

If anyone else is destined to don the green jacket this year, they're gonna have to beat the course, big time.

Barring a heretofore unseen collapse, they won't be beating Molinari.