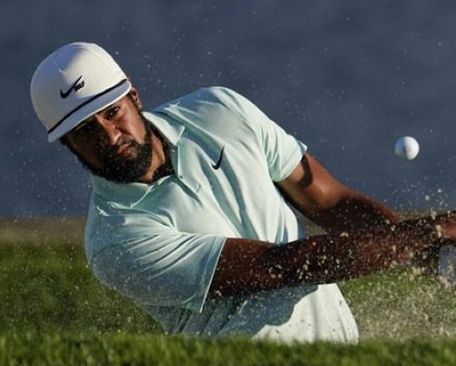 For too long, he's been one of the dozens of dudes the TV cameras cut over to when the tourney leaders are in betwen shots.

Tony Finau would play consistently enough to become a familiar name on the final day's leaderboard -- 47 Top Ten career finishes, including 8 runners-up -- and for five long years, that was as good as it got.

Dude claimed his first and only winner's check at the Puerto Rico Open in 2016, but since then ...

However, if one is ever gonna break that dry spell, it may as well be in the FedEx Cup playoffs.

Finau has been up to his usual modus operandi at the Northern Trust, the first of three playoff tournaments to decide the PGA Tour's champion. He'd been hanging in there for three rounds and change, starting a rare Monday final round two pops off the pace set by co-leaders Jon Rahm and Cameron Smith.

Uncharacteristically, the Spaniard began to falter at the final round's 15th hole. That's where his first bogey of the day appeared, and it was literally a flashback to this very situation in 2018 at Liberty National.

Then, Rahm found a fairway bunker that essentially blew his shot at that year's Northern Trust championship. Now, here he was again, landing in the same sand. His recovery ultimately led to a 7-footer to save par ...

It was the opening Finau needed.

Perhaps he was thinking to himself, What would Tiger do? After all, that who inspired him to take up golf when he was a 7-year-old kid in Lehi, Utah, watching Woods do his thing time and again.

Whatever, dude caught fire on the back nine.

Finau tore through Holes 12-14, going birdie-eagle-birdie and adding another bird on the short Par 4 17th about the same time Rahm bogied 15. It put Finau into the lead for the first time.

Smith caught him with a bird on 17, but this eventful day wasn't over until his slice on the first playoff hole said it was over.

With a shiny new trophy and a $1.71m paycheck in hand, Finau also vaulted to the top spot in the FedEx Cup standings: Now, with a shorter rest between events than usual, it's off to Baltimore for the BMW tournament.

While Finau goes there with a newfound boost in confidence, Rahm will at least be returning to an event where he has much better memories.