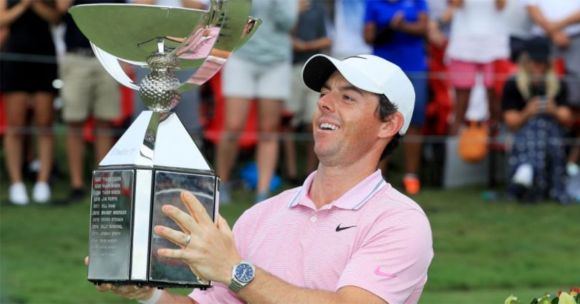 Any drama that remained in the final round of the 2019 Tour Championship was removed by the genius of Rory McIlroy.

The 30-year old Ulsterman collected an absolutely criminal $15million prize for his efforts, handling the entire scene with relative ease.

Unfortunately, the trophy presentation offered some unique challenges, though.

Let's watch and giggle as Rory attempts to hold the FedEx Cup trophy for more than five seconds without assistance:

Why so heavy, @McIlroyRory ? Was the $15 million inside the trophy? pic.twitter.com/rRixiK4P8n

Or maybe it was filled with the broken spirit and dashed dreams of the other 29 golfers he vanquished.

If dude's knees had buckled that much on the course, he wouldn't have needed to hold the trophy in the first place.

Rory began struggling the moment he was handed the trophy, failing to get a firm grip on the admittedly large physical representation of his victory.

The ethnically ambiguous Mike Tirico was sure helpful, mocking one of the top golfers in the world instead of maybe helping support the weight.

Ironically enough, Rory once preserved a trophy after winning the 2014 PGA Championship.

Man, that lid just popped right the hell off.

Clearly, there's nothing wrong with his reflexes, but the core strength seems to be lacking.