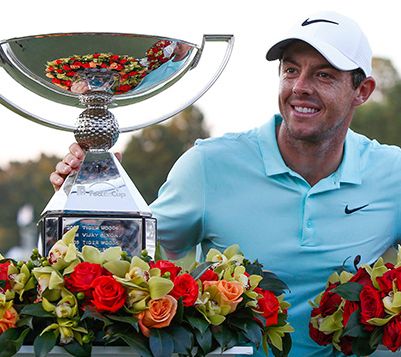 Think of it as golf's version of a double-header sweep.

Most of the PGA Tour Championship leaders were caught on the tail-end of Round 3 on Saturday when Mother Nature made a striking appearance.

As in a bolt outta the blue lit up a tree and sent six fans to the hospital with minor injuries.

Safe to say it was one of the weekend's more spectacular shots:

It obviously suspended play for the day, meaning the round's final pairings -- Rory McIlroy, Xander Schauffele, Justin Thomas, and Brooks Koepka -- had to finish 13 holes on Sunday before embarking on the final round.

That's not so bad when you're on a roll, and McIlroy was on a roll.

Dude was the lone player to shoot under par in each round at East Lake Golf Club in Atlanta, so the long day probably seemed like a short stroll as he posted a 4-under final round of 66 -- completing a 13-under 267 for the weekend -- to walk away with the Tour title and $15million first prize.

The key moment came in Sunday's round with a three-shot swing at the seventh hole:

Schauffele couldn't gain enough ground when McIlroy suffered back-to-back bogeys on the back nine, blowing most of his four-pop cushion.

However, the Ulsterman drained an 8-foot par on the 16th, all the South African could do was settle for pars, and McIlroy became the second golfer to raise the FedEx Cup twice, joining the Tiger.

Koepka still took Player of the Year honors for a sterling season that saw him claim yet another major.

Full marks, too, for the new Tour Championship format. It worked. The competiton was riveting, and the focus was where it should've been.

And after his bitter disappointment of missing the cut in his homeland for the British Open, McIlroy didn't mind this spotlight at all.