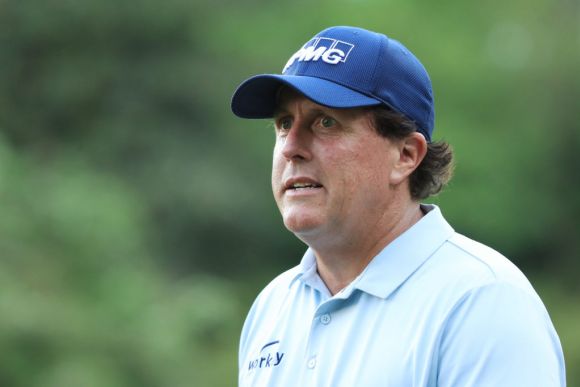 So stop us if you've heard this one before.

A professional golfer is forced to evacuate his hotel because of a fire and almost misses his tee time.

Phil Mickelson lived this harrowing tale this past Sunday at the BMW Championship, and survived to tell us all about it.

The hotel in question is literally right next door to Medinah Country Club, which is super-convenient unless the hotel is struck by  lightening.

Severe weather this AM at Medinah CC for #BMWChampionship final round. Reported lightning strike to the roof of Eaglewood Hotel that lines the course & where many officials staying! pic.twitter.com/aUxltXiiSS

But hey, we weren't there.

Let's hear it from Lefty, firsthand:

How’s this for crazy? My hotel was struck by lighting, I was on top floor,we were evacuated and the place is on fire(only thing of mine on fire this week.) I can’t get back into my room and may miss my tee time because I am without clubs and clothes.

Phil even threw a little self-deprecating humor in there for good measure.

The flame-retardant Mickelson was allowed back into his room eventually, arriving at Medinah a mere 30 minutes before his scheduled tee time.

Phil Mickelson is at Medinah. Pulled in at 10:15 local. Arrived in flip flops and put his spikes on in the parking lot. Took a couple swings with a training aid and went to the range. He’s off 10 tee in 30 minutes. pic.twitter.com/H3WP2tKHz7

Despite this adversity, Phil shot a heroic 71 in the final round, finishing the tourney at five under par.

Fire is usually considered a valid excuse for showing up late for a tee time.

Getting blackout drunk in a Winnebago, not so much.