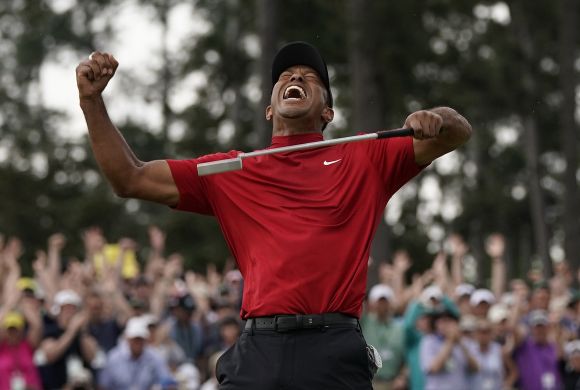 It's time to put theory into action.

As the Covid-19 pandemic has ravaged the sports world -- not to mention everyday life -- the thought keeps occurring that if any sport could make an early return in quarantined form, it'd be golf.

We're about to find out.

The PGA has announced it's gonna tee it up at the Charles Schwab Challenge at the Colonial Country Club in Fort Worth on 11-14 June, which oughta excite linksters everywhere.

It's not totally carved in stone yet, but suffice to say the hammers and chisels are out.

Certain details still need to be addressed, such as 25 international golfers -- Tommy Fleetwood and Francesco Molinari, for example -- and a whole buncha loopers getting permission to enter the USA.

They're planning on this being a closed-door event, kinda like the satellite mini-tours that have been happening in Arizona. Seems like they've had a clue with social distancing protocol; no Covid-19 cases have been reported to date.

This becomes even easier when ingenuity is added to the mix, like this clever-as-hell EZ Lyft ball retriever:

The point is, the PGA's not going into this move blindly. The satellite tours have been conducted without fans -- not too tough for them to do, really -- so the tour's got a responsible amount of data upon which they're basing their decisions.

Speaking of responsible, one of the Tour's unique features is the money it raises for charity.

Every event is organized as a 501(c)(3) not-for-profit organization where its proceeds are devoted to worthy causes. All told, the Tour raised $204million for them last year, boosting its all-time contributions to over $3billion.

Getting back into action, then, is one of the better causes golf can offer in these financially stressed times.

Their current plan is to stage 36 events, culminating in the Tour Championship to be held at the East Lake Country Club in Atlanta on 3-7 September.

As to the rescheduled Majors:

The British Open was cancelled this year with discretion -- and an insurance payout -- being the better part of valor.

Earl of Sandwiched between the US Open and Masters is the Ryder Cup, slated for 22-27 September at Whistling Straits in Sheboygan, Wisconsin.

Clearly, this'll be the most power-packed finale any gold season's ever had.

Now, all they've gotta do is have a season. Take care, dudes.