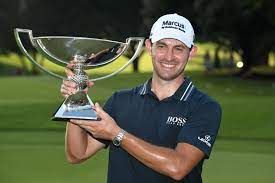 To think this coulda been the scenario a decade ago.

Patrick Cantlay was blazing his way through the amateur ranks, accumulating accolades at a stunning rate. There was no reason to believe his star would continue to rise when he turned pro and qualifed for the PGA Tour.

An innocuous swing at a driving range -- no different than any other of the thousands upon thousands he'd taken -- created such a sharp pain in his lower back that he thought he'd been stabbed.

That's a bummer for anyone, let alone an athlete, and especially a golfer. They get their power from the torque generated by the energy released when the resistance between upper and lower body is reconciled with great force.

Recovery took Cantlay years and forced him to change his swing mechanics. Safe to say it worked, with his finishes this season confirming it in spades:

The best was yet to come.

Following up on his anointment as Patty Ice by coolly holding off the mercurial Bryson DeChambeau to win the BMW Championship in last weekend's second leg of the FedEx Cup, Cantlay went wire-to-wire in the Tour Championship, which was necessary to stay a pop ahead of Jon Rahm.

Dude was beyond steady:

Keeping in mind the staggered start for this event -- Cantlay teed off at -10; Rahm began at -6 -- a few interesting stats mighta been overlooked.

In 21 rounds grouped together on the PGA Tour, they have never shot the same score.

Na has never won on the PGA Tour. He just picked the wrong weekend to finish with the best score.

Cantlay was nails whenever he had to be, which was virtually all the time, but the day's best shot had to go to Justin Thomas, who can shape 'em with the best of 'em:

The story of 2021 as highlighted in the FedEx Cup is whether a streaking Cantlay got hot at the right time or, more likely, the golf world's finally getting to see who he really is.

That $15m check he earned is life-changing, but after all he went through just to get to this point, dude might be one of the few who could say it's actually secondary to the achievement and mean it.

It's easy for someone else to state the wait was worth it to him, but time lost is something that can't be regained.

However, it does seem like Cantlay's gonna give it his best shot.