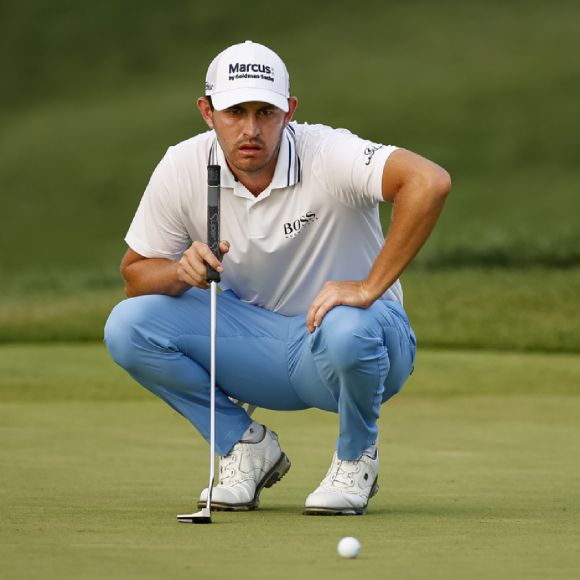 It could well have been that the pivotal moment that won the BMW Championship happened before the first ball was even struck.

That's when Patrick Cantlay decided to change the grip on his putter.

This was evident when the FedEx Cup series' second event came down to its two top contestants confirming one of golf's oldest axiom:

That saying's also as succinct as it gets for describing how Cantlay won the weekend.

Dude was absolute nails with his game on the green. The Strokes Gained stat's been around since 2004, and his +14.58 is now the highest ever achieved.

Cantlay underscored that fact in spades by drilling the playoff winner on the 18th from 18 feet out:

A playoff for the ages.@Patrick_Cantlay is victorious on the 6th playoff hole @BMWChamps.

That came at the end of a string of pressure-packed putts that were mandatory if he was gonna neutralize DeChambeau hole after hole.

The Tour's ringmaster kept leaving the door open for Cantlay by failing to capitalize when the rubber met the road on what could've been each closeout green.

The tourney didn't begin that way for DeChambeau, though. Dude ripped up the Caves Valley course for the pasture it was, providing only token resistance to the world's best golfers. Only the extremely careless were punished, and it's absurd that in a featured competition such as the FedEx Cup, every damn player finished under par.

Baltimore's not had a PGA event for 60 years. After this weekend, it'd be justice if they'll be forced to wait 60 more.

Still, chasing 59 is impressive enough and worthy of mention.

DeChambeau woulda done it in Round 1 if it weren't for that pulled putt on 18:

After his outstanding performance with the flat stick earlier in the round, who knew that missed 6-footer would be a harbinger of things to come for the dude whom many on the Tour call the Scientist.

At least he made history. No one on the Tour has ever carded an obscene 27-under for a 261 and not gone home with the hardware.

Center stage was all his for virtually all of the weekend, though, and he basked in it.

Watching him go about a round is sorta like waiting in anticipation of a stack-up in Nascar.

Every time DeChambeau pulls that cannon outta the bag and sets his ball on the tee's second story, no matter how much he claims he's simplified his swing mechanics, every witness knows the whole thing could blow up at any time.

It's like danger is his real business, and he relishes the razor's edge of it all.

Through it all, Cantlay was staying within himself, refusing to be intimidated by DeChambeau's titanic blasts and heroic recoveries.

Or his unfiltered comments, like this one on the 14th, where it's odds-on dude meant no offense but was in his own chaotic world:

"And I took that personally." pic.twitter.com/Y2D6LHHX1Z

While DeChambeau found water twice on the back nine in Round 3, Cantlay was avoiding drama altogether. Maybe his drives were landing half a mile behind DeChambeau's, but they were well-set for manageable approach shots to the greens where he'd been working his magic all weekend.

Dudes were either knotted up or within a stroke of each other for most of Round 4, through good times and bad

The latter was evident on the 17th hole, where Cantlay inexplicably bounced into the drink, whereupon DeChambeau countered with a foible of his own, ie- a just as inexplicable fluffed chip:

Bogey for Bryson.
Bogey for Patrick.@B_DeChambeau takes a 1-shot lead to the final hole @BMWChamps. pic.twitter.com/rBWQMbqF0y

From that point onward -- the 18th through six thrilling playoff holes -- it was all about DeChambeau having chance after chance to put his steady nemesis away.

Cantlay survived every challenge, though, compliments of his cold-blooded putting accuracy:

Finally, he could give that white-hot Scotty Cameron Phantom X5 a well-deserved rest after it negotiated 537 feet of putting efficiency.

And he could glide into the Tour Championship in Atlanta with a two-pop lead on second-placed Tony Finau before they even hit the practice range, thanks to the FedEx Cup's seeding system.

Cantlay will do it with a newly-anointed nickname, too: Patty Ice.

Some of those fans, though, got a tad too loud in their jeering of DeChambeau, which has been following him around for a while.

Dude likes to be loved, but sports can use a few villains to spice things up every now and then. Whether he likes it or not, some think he's one of them. Unfortunately, a few of those fans are pushing the envelope too far.

One of them, in fact, got close to being up close and personal as a result. That can't happen, either.

Anyway, now it's on to the the Tour's grand finale, on a course deserving of hosting such an occasion, and after the field's been winnowed from 125 to 30 with a staggered start, there's no doubting it will be.