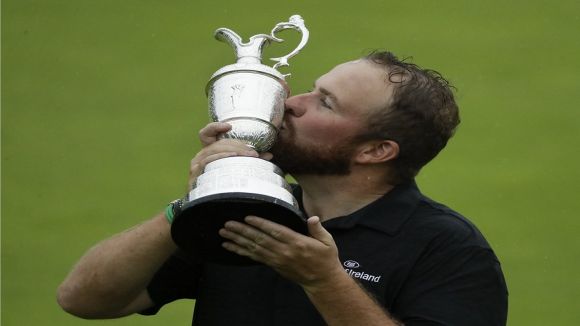 After three rounds at the Royal Portrush, Shane Lowry's challengers couldn't faze him.

So the time had come for the elements to give it a go.

Midway through Lowry's and Tommy Fleewood's final round, a North Atlantic rainstrom that was damn near horizontal swept over the course and winds in the high-teens to low-20s made themselves known all afternoon.

On a course where the preferred high-arc shots were suddenly uncontrollable and low-flying screamers made landfall a crapshoot, this definitely became a who dares wins kinda round.

Fleetwood, for one, found himself on more wild high ground than Brian Boru and suffered the same fate in golfing terms.

Lowry, meanwhile, just kept soldiering on, which is all he really needed to do:

Now, here's a golf factoid that you don't see every day:

The Irishman's the first bearded winner of an Open since Bob Ferguson triumphed at St Andrews in 1882.

In that case, the right dude won it this year.

Lowry now adds to the group of champions from the Emerald Isle who've picked off 10 Majors in the last 12 years. Those players are justifiably proud of what that means in their parts.

Given the turbulent history there -- still ongoing as a sticking point in the Brexit mess -- this weekend has been embraced in both the Republic and Ulster as a rare unifying moment.

Hopefully, there will be more to come, on the course and off.