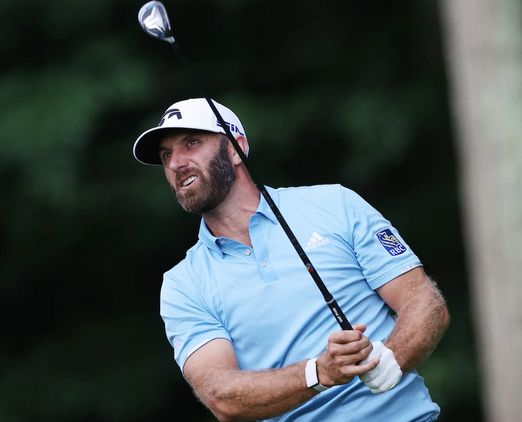 It's surely the oldest tip in golf:

You drive for show,
but you putt for dough.

Even before Tiger Woods took distance to a new level -- rendering countless courses obsolete in the process -- the manly urge to air it out has been a source of awe at every level of the game.

Woods has inspired a fleet of new bombers on the PGA Tour, from the radical Bryson DeChambeau -- who's still reinventing himself -- to the steady Rory McIlroy.

However, only a handful of them have consistently enhanced the balance of their repertoires to complement their power as well as Dustin Johnson.

Here he is at Sentry in 2018, beating where the course architect figured the mortal limit was before the 12th hole followed contour:

There was a bit of that at the Travelers this weekend, like ...

Phil Mickelson is 50 and still learning some of the more intricate rules of the game.

This clutch par save on No. 17 helped him reach the clubhouse with the lead. pic.twitter.com/CNi6c0kpFT

Not that dude wasn't without adventure.

A wild par for @DJohnsonPGA. 😲

He'll hold a 2-shot lead with 3 to play when play resumes.#QuickHits pic.twitter.com/g65tTBgHuf

Danger's gonna happen to the best of them.

It's minimizing those occasions as well as recovering from them that gives Johnson a je ne sais quoi sorta consistency that really hasn't been seen since the days of Arnold Palmer or Repo Man.

In these modern times, dude doesn't survey the situation, take a long drag on his cigarette, toss it down with disdain, and go for it like Arnie did. Johnson just figures he got himself into it, so he can get himself out of it.

This victory was personnified by Johnson's three-hole saga in the final round in contrast to Day 3 leader Brandon Todd's painful triple bogey on the 12th in the final round, a series that put paid to the title:

Throughout the weekend, it's what he did.

Culminating in making the final round interesting but inevitable:

Speaking of Mac Hughes, that pair of birds was good for an extra $210,900 in his pay packet.

Those putts lifted highlighted his final-round 67 and lifted him into a tie for third with Will Gordon. Had Hughes settled for a couple of routine pars, he woulda split the prize money for a six-way tie for sixth place. Instead, he split earnings with Gordon.

This is Johnson's 21st championship and the first since last year's WGC-Mexico triumph 20 tournaments ago.

Dude's streak is intact, and in a sport where one shot can derail an entire weekend, that's saying something. A lot of something.