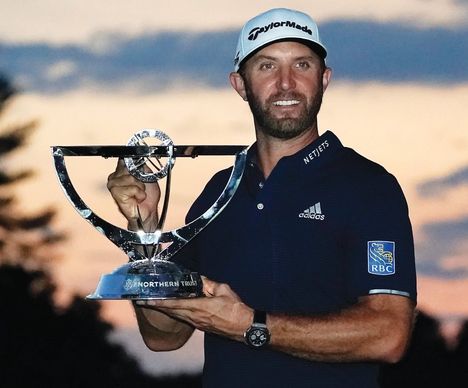 Turns out that the hottest dude in golf kept the sizzle crackling when the PGA Tour's three-week playoffs fired up.

Dustin Johnson blew away the field while renting TPC Boston asunder, finishing an ultra-spiffy 30-under for the weekend to claim the Northern Trust title and the $1.71million check that went with it.

Think of it as adding the green theme to a stratospheric performance that made for a sorta metaphoric Northern borealis over the Boston area.

All those FedEx Cup points that are accrued through the season come home to roost in the playoffs:

Johnson's been jockeying with Jon Rahm lately to sort out who's who in the zoo, and after this weekend, dude left no doubt:

Think of it as golf's version of vapor trails.

Dude's 30-down was one stroke shy of the Tour's record for a four-round blitz. That's what happens when one hits the greens in regulation. Johnson's round-by-round total in that department went 15, 17, 15, and then all 18 greens on Sunday.

The follow-up advantage to that is he led the field by requiring a mere 104 putts for the tourney. This efficiency also helped account for the fact he had at least an eagle in each round and five overall.

All in all, just a classic in-the-zone experience.

Incidentally, he's the World No 1 again, too.

The BMW's next, but after this performance, Johnson's odds-on to receive the -10 head start when the Tour title's on the line the week after that.