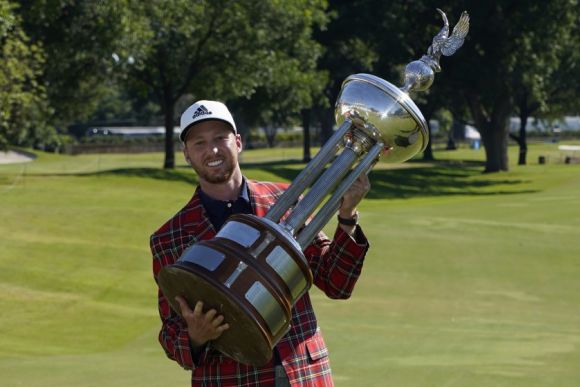 If anyone wanted to bestow upon Daniel Berger the nickname Microwave, dude's earned it.

Dude was cruisin' before the PGA Tour was so rudely interrupted by the Covid-19 pandemic, and he immediately picked up where he left off when play resumed.

Coming into the Charles Schwab Challenge at Ft Worth's prestigious Colonial Country Club, Berger had racked up 24 straight par-or-better rounds, and it became clear all weekend that the Tour's longest stoppage since World War II wasn't about to cool him off.

Berger add to that streak -- the record, though, is a far-off 52 rounds -- and needed every stroke saved to force a playoff against rising star Collin Morikawa and hoist the hardware on the first extra hold when the 23-year-old rimmed a three-footer to hand Berger his third Tour title.

And hoist is the right word. The former Florida State Seminole stands 6-1, but the tallest trophy on the Tour --  42 inches and 55 pounds -- almost made him look like a leprechaun.

That $1.35million winner's check will surely compensate for this event's traditional but fashion-tragic jacket, though.

The threat of having to wear it didn't put any of the players off, though. Not after 91 days of waiting had them primed to get back to it. This was the most loaded field in Challege history:

The Colonial's layout was pure Golidlocks zone for players getting their games back together:

Scoring was good all through the weekend, even though there was no gallery for balls to hit and richochet back into the fairway.

The empty-course atmosphere was kinda eerie, and players on occasion needed to be reminded that it was down to them to pull a club outta their bags, but despite the virtual lack of a soundtrack, the play made up for it.

Indicentally, did Bryson DeChambeau go on the Brooks Koepka conditioning program during the layoff or what? Maybe he wants to be ready next time.

Or maybe he wanted to hold that hunka-hunka burnin' hardware with one hand if he won this weekend.

Meanwhile, Berger's just glad to be healthy again. Dude's been battling a wrist injury for the past two years, evident in his missing 10 cuts in that span. He'd won back-to-back St Judes in 2016 and 2017, carrying his weight as part of that impressive Class of 2011.

Given Berger's prevailing over a field that resembled a TPC event, odds are stong that he's not done climbing.

As to the Tour, they've gotta be pleased at their first in-pandemic results. No positive tests, and a good time was had by all. Or at least, all that were able to be part of the bubble.

Now, like Berger, they just need to keep it going.