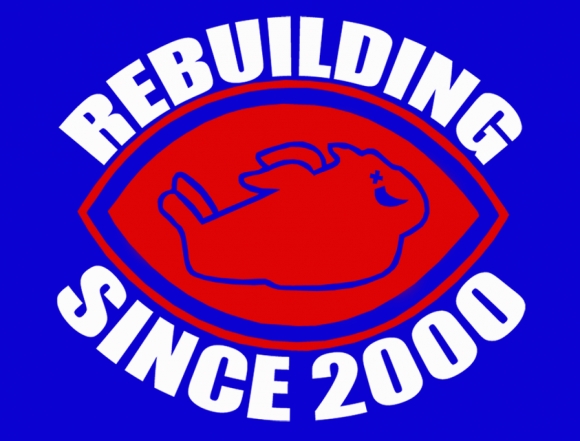 The AFC East is one of the most interesting divisions in football.

It houses possibly the greatest dynasty in NFL history in the New England Patriots.

Since the turn of the century, the Pats have claimed the AFC East title 14 times in 17 seasons.

The other three of those division titles belong to the Miami Dolphins (2) and the New York Jets.

And then we have the Buffalo Bills.

The club has had exactly two winning seasons since they last won the AFC East in 1999. In that same time, Buffalo's had nine dudes run through their head coaches' revolving door.

After the latest one -- Sexy Rex Ryan -- flamed out with another mediocre team, the Bills decided it was time to rebuild again, ie- the same thing they've been doing for the entirety of this century.

You know your franchise has been bad when even the Browns have played in more playoff games in the same period of time.

As part of the rebuild, the club brought in a new coach, Sean McDermott, and GM, Brandon Beane. Incidentally, those moves were inexplicably made in that order.

In all their infinite wisdom, owners Terrence and Kim Pegula decided to let former GM Doug Whaley hire McDermott and participate in this year’s draft before firing him.

Watkins, for whom Buffy paid a heavy price back in the 2014 draft, was sent to the LA -- for Located Again -- Rams in addition to a 2018 sixth-ounder in exchange for CB EJ Gaines and a 2018 second-ound pick.

When healthy, Watkins is a top receiver in the league. Of course, the when healthy part is ever-present with Watkins on the team.

Soon thereafter, the Bills sent Darby to Philadelphia for Jordan Matthews and a 2018 third-round pick. Darby is a serviceable player, but the move is well worth it for a team that's going into a rebuilding phase.

If that term sounds familiar to Buffy fans, it should.

Looking at the net effect of these two deals, the Bills come out looking pretty good on paper.

Trading away a WR, CB, and a 2018 sixth-rounder for a WR, CB, and 2018 second- and third-rounders has the team trending in a fairly positive direction for the future.

But Bills fans are long-suffering realists. They know their team's gonna be bad.

Still, there is a bright side.

Buffalo fans have the Jets and their potentially worst offense in NFL history to mock.