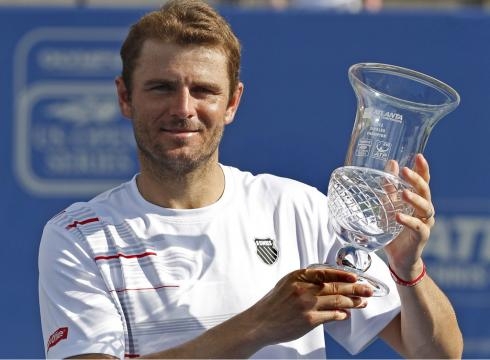 Yes, you read the title right.

Mardy Fish deserves to have his moment in the sun.

Mardy was never a major title contender, nor was he ever an amazing talent; however, in a day in age where American tennis is at an all-time low, Mardy’s achievements deserve to be recognized.

Mardy was able to find a degree of success in the early part of his career when he captured his first singles title in Stockholm in 2003, as well as winning the Silver Medal in the 2004 Olympics.

The following season would see Fish take his game to the next level, as he was able to make it to the quarter-finals at both the Aussie Open and the US Open, where he was beaten by his buddy Andy Roddick and Rafael Nadal, respectively.

2011 would prove to be Mardy’s greatest year on the ATP tour.

In the Grand Slam department, Mardy was able to reach the third round in the French Open, as well as make it to the quarterfinals, where he would yet again be bested by Nadal. Luckily, he'd have his chance to avenge that loss at the Western & Southern Open, when he again met Nadal in the quarters.

This time Mardy defeated the World No 2 in straight sets:

Mardy’s final singles title would also come in 2011, where he defeated fellow American John Isner at the Atlanta Tennis Championships. That strong performance allowed Fish to climb to World No 7, where he surpassed Roddick as the top-ranked American.

In 2012, Mardy started to experience heart problems in his sleep, which forced him to skip the French Open. In order to fix the problem, he had to undergo a cardiac catheter ablation. He also started to experience mental anguish from his condition, as he was afraid to sleep alone or in beds away from home.

Fish was able to make a comeback, but he was never the same.

He withdrew from a fourth-round match against Roger Federer for what he claimed were “precautionary measures.” He then began experiencing panic attacks on the flight home, which caused him to prefer charter jets. It began a very dark period in his life; he was unable to leave his house for three months.

Mardy was able to play here and there in 2013 but wasn't able to get past his panic attacks.

Refusing to give up hope, Fish vowed to play again some day. Roddick tried to help him get back onto the court in 2014, but the plan to enter the doubles competition was denied due to Roddick not being in the drug-testing pool by the required date.

Finally, Mardy did return to tennis this year, playing his first singles match in18 months at the Indian Wells Masters against Ryan Harrison, where he competed rather well, other than being caught in a net.

With his comeback out of the way, Mardy was free to end his career in a satisfying and regret-free manner. Just like his friends Andy Roddick and James Blake before him, Mardy has decided to end his career at the US Open.

My schedule this summer will be Atlanta, Cincinnati, and I will finish my career at the US Open. #lastride

Mardy Fish was far from the savior of American tennis, but he deserves considerable respect from the tennis community.

The man was robbed from doing the thing he loved, and it's only through hard work that he was able to get his career back to this point.

Most likely, Fish won't make it past the first few rounds. But still, Mardy Fish deserves to go out a conquering hero of sorts, amid thundering applause.