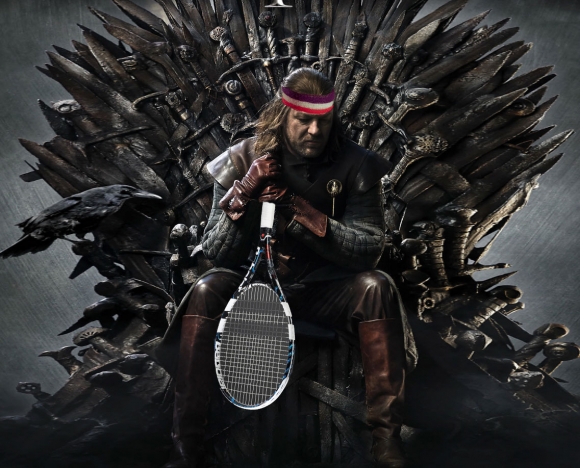 Rafael Nadal has long been the king of the French Open.

King Rafa’s rule came to an end Wednesday in the quarterfinals, where he lasted a mere three sets. Now, his realm is there for the taking, with four possible usurpers fighting for the throne.

The best bet, of course, is the King Slayer, Novak Djokovic, who defeated Nadal in the quarters. He's the big dog in both the ATP Rankings and French Open seeding. The Serb also has claim to eight Grand Slam titles, including the 2015 Australian Open.

The only jewel lacking in Novak’s crown is the French Open's Coupe des Mousquetaires. If he can find a way to capture the trophy, he strengthens his argument as top player of the decade.

The next best candidate is the King in the North, Andy Murray.

The Scotsman became the savior of British tennis as the first Briton to conquer Wimbledon in 77 years.  Murray’s victory over David Ferrer marks the third time he's reached the semi-finals at Roland Garros; however, as of yet, dude's been unable to make to Sunday.

While Murray looks to change all that this year, Djokovic looks more imposing than usual. This could be a battle for the ages, with the only downside being that it’s happening in the semi-finals as opposed to the championship.

Then there's Stannis, aka Stan Wawrinka, awaiting them on other side of the draw.  The Pole captured the Australian Open last year and wouldn't be a total shock by claiming another Slam title here.

Wawrinka is riding the high after defeating his fellow Swiss countryman, Roger Federer in the quarter-finals. The question now is, can he get those final two wins to make his name one to be reckoned with in the post-Big 4 era in tennis?

The last and least likely usurper is Jo-Wilfried Tsonga. He's erratic, but he came close to becoming the first Frenchman to win at Roland Garros since Yannick Noah in 1983. Tsonga hasn't been to a Grand Slam final since 2008, where he lost to Djokovic.

Dude’s gonna have a hard time against Wawrinka, and an even harder time against Djokovic or Murray if it gets to that, but no one can make it this far at Roland Garros without being considered a contender.

The Game of Racquets is an enduring one. Only those who have truly mastered its craft can claim the accolades that await them.

In these times where the reigns of kings are ending, many a usurper will rise. They can only hope they don't have feet of clay.