Djokovic Aces a Line Judge, Ejected from US Open 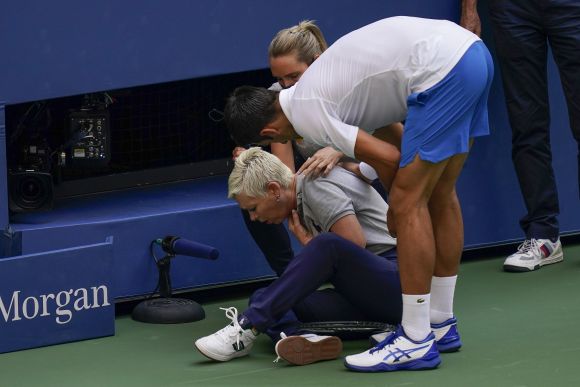 Dude came into the US Open heavily favored to win his 18th Grand Slam title and close to within two victories of Roger Federer's record haul of 20 Slam championships.

Nothing to do with Pablo Carreno Busta, the fourth-round opponent of top seed Novak Djokovic.

Their first set was still in doubt but nearing a conclusion with the challenger leading, 6-5, when a burst of Serbian anger produced the shot of the match.

That'd be the chair umpire, who'd just witnessed what could possibly be the dumbest thing Djokovic had done in his illustrious career.

Well, that and his quackified comments about Covid-19 and vaxxing in general.

It'll take something even more wacked to beat this one, though:

Odds are strong that'd be 2-seed Dominic Thiem, who's been knocking on the door for a Slam trophy for some time, now.

To date, the Austrian's had a fairly strong record of limiting his aces to the other side of the net.

Meanwhile, back at the scene of the shame, Djokovic discovered the hard way that even accidents have consequences.

In this case, it's specified in Article III: Player On-Site Offenses, Section N of the Official Grand Slam Rule Book:

Players shall not violently, dangerously or with anger hit, kick or throw a tennis ball within the precincts of the tournament site except in the reasonable pursuit of a point during a match (including warm-up)  ...

The USTA also weighed in by yanking ball all the ranking points Djokovic earned to that point in the tournament and will be fined the amount of prize money he'd won to that point in addition to any other fines that'll be levied against him.

Because of the pandemic's effects on the sport, both the ATP and WTA have revised their rolling system as to how the rankings are calculated. It's been extended from the usual 12 months to 22, ie- March 2019 to December 2020.

That means if two editions of the same tournament take place during the rankings period, a player's best result is used in calculating his ranking.

Djokovic will be able to retain the fourth-round rankings points he earned at the 2019 Open.

In essence, dude just got his pee pee whacked, but not much more other than what amounts to a bitta pocket money for a kajillionaire and a hella lotta embarrasment for an incident that'll be burned into the annals of tennis idiocy for a long, long time.