Djoko Knows Tiebreakers, Wins Three of Them to Claim His 5th Wimbledon Title 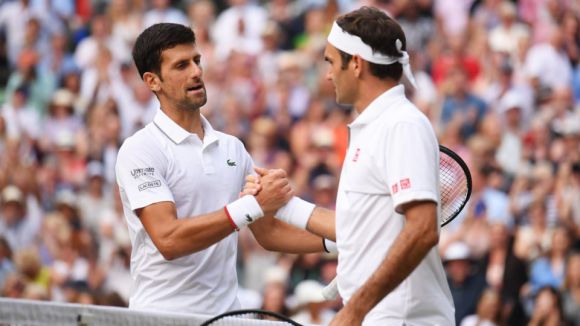 There's an old sporticism that goes, I didn't lose; the game just ended before I won.

Well, after a record-breaking 4:57 of sensational championship tennis at Wimbledon's fabled Centre Court, it was time for the game to end.

If it weren't for tiebreakers, though, it's possible that Novak Djokovic and Roger Federer might still be playing.

As it was, Djokovic's dominance in tiebreakers was the difference.

Federer played the sorta match you'd expect from a 20-time Slam champion. Dude was on his game:

This five-hour marathon was packed with extraordinary moments. The hits just kept on coming:

It was Federer who had the first two match points, just like he did when these two vied for the title.

In that one, Djokovic bombed two straight forehands to recover and ultimately prevail in five sets. Now, here it was again:

*How* do you do this to save Championship point?#Wimbledon @Djokernole pic.twitter.com/cHPpqADVFG

Djokovic had his moment soon thereafter and made it count.

When combatants are as closely-matched as these two are, it is a minute detail or two that decides who hoists the hardware and who carries the plate.

The tiebreaker means we'll never see a three-day marathon like Isner-Mahout in 2010, what with their 70-68 fifth set.

Wimbledon's historic first abbreviator happened earlier in the tourney, when Henri Kontinen and John Peers won a doubles match with it.

As provider of a certain end, though, the tiebreaker has proven to carry its own sorta drama. And after five hours of quality tennis, that sorta coda became the cherry on top.