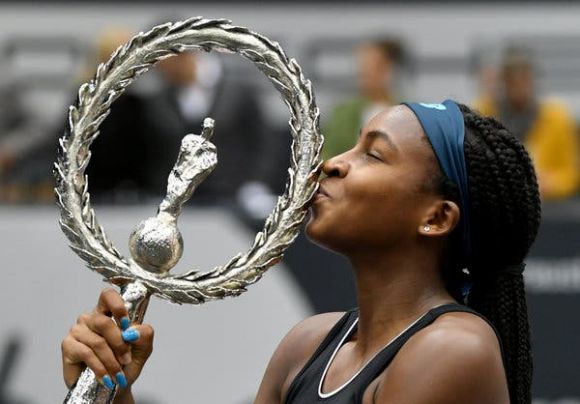 When you're a precocious and promising 15-year-old on the Women's Tennis Association circuit, you take it for granted that -- as AC/DC so succintly put it -- it's a long way to the top if you wanna rock-&-roll.

So you'd expect qualifying losses to pile up while you're gaining experience.

However, you'd never expect one of those losses to vault you into your first championship.

It's rare, but that's how the latest sensation in women's tennis -- Coco Gauff -- made the most of a second chance to win her first WTA tournament.

Among other things, the lucky loser rule is an event's assurance of a full bracket after qualifying play.

Not to mention fair, as long as the ranking criteria has credibility.

Safe to say that tennis' system is levels higher than college football's, but that's another story for another section.

Meanwhile, the story in Linz at the Upper Austria Ladies Open was Gauff getting first dibs on being a lucky loser after dropping her second-round qualifying match.

The Florida native took advantage, wound up battling her way to the title match, and then defeated Jeļena Ostapenko -- 6-3, 1-6, 6-2 --  to claim what the odds seem to indicate will be her first of many WTA championships:

This makes Gauff the youngest player to win a WTA event since 2004 and the youngest American to do so since Jennifer Capriati triumphed in Toronto back in 1991.

The teenager made waves at 2019's final two Slams, but really, topping Venus Williams at No 44 was her most prestigious victory. When she met one of the current elites ...

Ostapenko is currently No 72 in the rankings, but along the way, Gauff notched a notable victory in the quarters by knocking off No 8 Kiki Bertens.

Add the confidence gained in actually holding a WTA trophy, and this stop in Austria should provide Gauff with an added boost in her drive to be the next Serena Williams.

Tall order. She's got time, though, and now a first championship as a major milestone along the way.