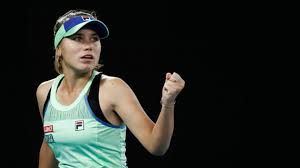 All elite athletes are intense.

There's just something about Sonya Kenin that seems more so. Fierce, even.

Watch how she gets from Point A to Point B when she's not in action retrieving a volley. Dudette just gets there, stridently, urgently, and with purpose.

This was especially evident after dropping the first Aussie Open championship set to Garbiñe Muguruza -- 4-6, 6-2, 6-2 -- before annihilating the unseeded Spaniard and hoisting the hardware.

As its been for most of the tournament, 14-seed Kenin rarely conceded an easy point.

These two had met once before, in a first-rounder at the China Open last September. Kenin took that match in three sets, too, likely leaving no doubt in Muguruza's mind that a power game was her best chance at reversing the results this time around.

The strategy was a wash. She racked up 9 aces, but at the expese of 8 double-faults. Toss in the fact her return-point efficiency was only 36% (31-87), which virtually created a done deal for the deliberate Kenin.

Kenin's a 5-7 fireball who came to the USA from her native Russia as a toddler. Her parents had only $286 to their name at the time, so it's no wonder she learned to be a fighter from the start.

Her dad, Alexander, ultimately became her coach, and fortunately for her, is not the overbearing type. Observing him while the match is on, though, makes it obvious where her focus comes from.

While still not afraid to be demonstrative on the court, at least Kenin's refined her demeanor a bit more gracefully than it had been ...

Dudette's still only 21 and becoming more consistent with every outing, as evidenced by being named the 2019 WTA Most Improved Player.

She's now turned it into her first Slam, becoming the youngest American woman to win a Slam since Serena Williams in 2002. This victory should also raise her a few notches in the WTA rankings, likely to single digits.

More importantly to her, Kenin's now firmly in the running to qualify for the USA Olympic tennis team. She's not doubting her chances. At this point, odds are not many others will, either.