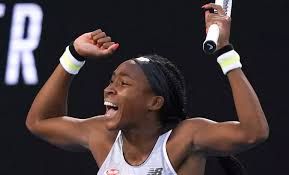 Even through the smoke-choked skies of a continent burning up, it was still possible to see the dawn and dusk in Melbourne.

They were even clearer today in metaphoric form during the Australian Open third round at the Rod Laver Arena in the rising Coco Gauff and setting Serena Williams:

If she was consistent with any aspects of her game, it was in failing to convert all but one of her break opportunities and missing groundstrokes on damn near every occasion.

In fact, Serena lost match point by committing her 27th unforced error on the backhand side, which was the 56th of her day:

Wang must've learned something from her last clash with Serena.

Coco's definitely been drawing upon her experiences.

She defeated Venus Williams in the first round here the same way she did at Wimbledon last year when she burst into the tennis world's consciousness, and she clearly improved upon her loss to Osaka in the US Open.

The teenageer was both composed and in control, playing her game while watching Osaka become increasingly frustrated with her inaccuracies. She committed 30 unforced errors in just over an hour and only managed to win 33% of points on her second serve.

There's no doubt that when Coco's in the zone, she's a sniper. Her confidence shows in big matches with opponents where she's faced them before. It's stepping-stone development at its thrilling best.

At the same time, that's not conducive to the meteoric rise so many are expecting of her.