Wunderkind Götze Puts Germany on Top of the World 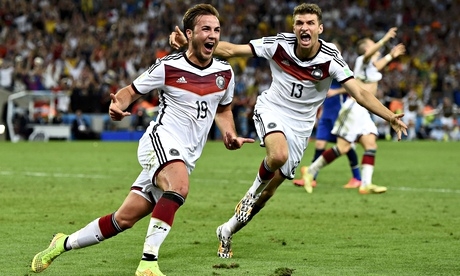 A well-oiled machine has interchangeable parts.

And that describes das Maschine perfectly.

Germany manager Joachim Löw inserted two key components -- along with another one before the match even started -- in the midst of a tension-filled World Cup title tilt, and they became the ultimate difference, teaming for the sole goal in extra time that enabled die Mannschaft to meet its destiny: a fourth championship, becoming the first European side to claim it in the Western Hemisphere.

In a contest filled with missed opportunities on both sides, the deciding strike was a virtually indefensible classic. In the 113th minute, 23-year-old André Schürrle streaked down the left lane, aware that 22-year-old star-on-the-rise Mario Götze was splitting the scant space Argentina's defense had to concede whilst on the move.

Schürrle proceeded to make no mistake with a pinpoint cross, and Götze masterfully controlled and converted it:

Anyone who's followed Götze's ascension -- and that includes FC Bayern, who might need to consider the PR consequences now if they don't keep him happy -- knows this is what he does:

Löw's managerial brilliance was in his roster selection and relentless system. Argentina's Alejandro Sabella countered with sound tactics, switching to a diamond formation in mid-match, for example, in attempt to open space for Lionel Messi, who rarely shook Germany's close marking. However, when he got his shots, they were from low-success positions.

In fact, it was another Messi misfire that capped the day's action and summarized the Argentines' futility:

So it was all over except the celebrating and football historians waxing poetic. While Germany collected FIFA's golden bauble, Messi received a lovely parting gift, and die Mannschaft goalkeeper Michael Neuer ... well ... ... it looks like he got the gilded remains of Thing from the Addams Family.

May it rest in peace.

And through it all, Götz was unfazed. Not a hair was out of place. Maybe it's his destiny to indeed walk from FC Bayern and sign with Chelsea.