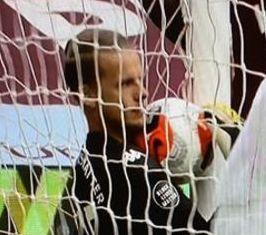 First things first, and it's an obvious one:

Teams in any sport have an entire season to prove their worth or accept a just fate.

As such, it's now AFC Bournemouth's turn to accept that truth the hard way.

After a five-season run in the Big Time, the small-market Cherries have joined not-much-bigger Watford and Norwich City on the trudge back down to the second-tier Championship.

By one point, dudes got pipped at the post by Aston Villa:

And here's the bitch:

In a match on Wed 17 Jun, Sheffield United had three points denied because the VAR missed a crucial goal they scored when the Cherries' relegation rival Aston Villa's keeper caught a shot, fell backward, and carried it into the house:

The final turned out to be 0-0. The Villains gained a point due to both human and mechanical error.

How in the name of Stevie Wonder do they miss that?

Hawk-Eye's the company that manufactures and operates all VAR for the Premiership, and the best they could do was offer a limp apology for the error.

Disconsolate Bournemouth supporters point to the final table and see that if Villa didn't get the point, they'd be tied at 34 for the season with their Cherries, and their lads woulda stayed up on goal difference.

The financial consequences are enormous.

It's no surprise there's been talk around the ground for the past few weeks about the possibility of legal recourse against Hawk-Eye.

When viewed in the harsh light of cold reality, there's only one response they'd get, though:

Why it took the directors so long to realize the obvious can only be ascribed to the state of shock they're still suffering.

They have no basis for an argument because the Premiership beat them to it as a caveat for adopting VAR:

Bournemouth thus was quite aware of those stipulations before they even touched a ball this season.

So, they've finally realized a lawsuit's not gonna get them anywhere. The next issue's gonna be, where are they gonna get?

The Cherries ran up a staggering debt trying to stay in the Big Time, and now it'll come due in the Championship:

Just as ominous, over £115million of their total revenue came directly from their participation in the Premiership. So, it doesn't take an Einstein to see the eight-ball this crew finds itself behind.

Financial Fair Play rules in the Championship mean that clubs must demonstrate they haven't lost more than £39m over the past three seasons. Otherwise, they face the possibility of sanctions being imposed.

That's a formula for falling right into the Championship relegation zone and spending next season battling to keep from dropping down to League One.

Right now, it looks like Bournemouth will have to spend their parachute payments into paying off their debts. Combine that with blowing up the roster to cut the salary hit, and the Cherries probably won't have much left over to build a team that can challenge for anything but holding on for dear life in the Championship.

Their piece of the South Coast is an awesome destination for daytrips and vacations. In normal times, the tourism industry rakes in around £500m for the region, and reliable estimates figured the Cherries accounted for around £50m of it for each year they were in the Premiership via everything from opponents' supporters to media exposure.

No matter which way one looks at it then, their relegation's gonna be a major financial hit.

It's no wonder, then, the club and its supporters rue that ghost goal at Sheffield.

But a sobering look at their season's loss column is the real indicator. That's a body of work that renders one non-goal as damn near inconsequential.

If only it was.