Sounders Take Home MLS Cup ... Where They Were Already 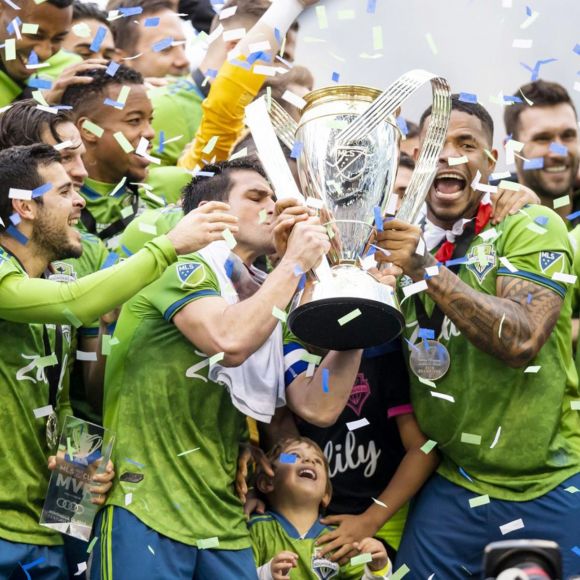 The largest crowd ever to see a sporting event at Seattle's CenturyLink Field -- home of the NFL Seahawks -- just saw something that's never happened in either the MLS or the NFL before:

That'd be the home team playing for their league's championship on their own turf and winning it.

The Seattle Sounders were one of professional soccer's first success stories back in their NASL days, which was a feat in itself.

Dudes wandered around in the USA's minor soccer wilderness before joining the MLS as an expansion club in 2009. Since then, there hasn't been a season where they didn't make the playoffs.

Drew Carey musta thought so. Dude bought into the club. So did Seahawk slinger Russell Wilson. His wife and Macklemore soon followed.

Ergo, this is a trendy club among the locals.

Capping off the warm-&-fuzzies, the Sounders are coached by one of their own. Seattle resident Brian Schmetzer has played for them, hung with them when they wandered in the wilderness, and led them to their first MLS title two seasons ago when Toronto hosted it.

He also had his crew well-positioned to withstand Toronto's relentless thrusts through the hour mark.

And then, being real, Seattle midfielder Cristian Roldan channeled his inner lumberjack -- or maybe Seahawk -- and chopped down Jonathan Osorio. The possession change was ultimately the game's turning point:

That the MLS didn't chalk that up as an own goal -- who wants that in a title game? -- can only be considered as a PR coup and a cherished memory for Kelvin Leerdam.

This development lit up the crowd, and the final half hour was all Seattle, on the field and in the stands.

Odds are it'll be a while -- if ever -- that we'll see an NFL host team win the Super Bowl:

All the more reason why, say, 250,000 or more Seattle fans will soon be saying they were there when the locals made history.