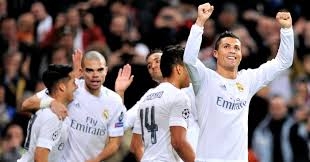 Hockey's got a phrase to describe those times when also-rans take on an illustrious foe.

That's because only those who really care know who they are, and that group's usually limited to family members, close friends, and bookies.

Shouldn't Atlético get a lovely parting gift or something?

Frankly, the Bundesliga is worse.

In all reality, the Stern des Südens wrapped up this one the moment they stepped on the pitch last August.

When will someone come on down and spring a surprise?

We should only live so long.

In theory, Barça had a shot at overtaking Real on goal difference, but theory doesn't include Malaga.

They went meekly into the Costa del Sol's sunset, 0-2 to Los Blancos.

Cristiano Ronaldo is on his way to a fifth Ballon d'Or and took any thought of usurption outta the equation in only the second minute:

Karim Benzema -- as always with his tiger instincts -- got the second for Real and officially secured the La Liga title.

Where would Real, Barça, and FC Bayern be without the Champions League to offer moments of the unknown each year?

Actually, one of these days, they may actually get bored with dicking through a domestic schedule and take the Champions to its ultimate extension, ie- a pan-European Premiership.