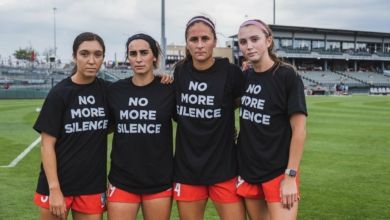 Maybe U2 was singing about the Troubles that plagued Northern Ireland for 'way too long, but their plea resonates with so many other issues that just won't go away:

How long?
How long must we sing this song?

Like damn near every other widespread sexual harrassment scandal, there's just no shortage of villains for the two groups who sicken this earth with their actions: In this latest edition of humans acting sub-human, it's come out that the National Women's Soccer League has been infected by jerks and jerkettes whose smug self-entitlement convinced them that a mixture of power-lust and basic lust is a fundamental right.

As usual, they operate in the shadows, which is further proof that they're giving cretins a bad name.

Sunlight once again has served as the best disinfectant, though. In this case, the shades were pulled by former players Sinead Farrelly and Mana Chim.

Fallout has been immediate:

The sad aspect of all this is why the harrassment and assaults went on for so long. National team star Alex Morgan got right to the point:

She wasn't alone in her raising objections.

Not one to mince words, Morgan's fellow football luminary Megan Rapinoe weighed in on the matter and basically turned the cat's ass to the sun:

Never once during this whole time was the right person protected. Not Mana, not Sinead, not us not the players not the little girls who will become us not the big girls who already are us not any of US. This statement is beyond disrespectful. https://t.co/HDPkFhFEc6

If Commissioner Baird did anything halfway appropriate as all this has come to light -- resigning was fully appropriate -- it was suspending this weekend's slate of matches so as to assess the fallout and start making a plan for the league to get its act together.

Legal action will surely be taken in some manner, but that'll be a process, albeit a much-needed one to bring the perps and enablers into account.

Other measures, though, need to be taken now for the sake of precedence and player safety:

SYSTEMIC ABUSE PLAGUING THE NWSL MUST NOT BE IGNORED pic.twitter.com/WlhcWW7R8m

It's important that all this groundwork will quickly lead to the implementation of policies and regulations that will result in addressing any further incidents in an effective, strong, and resolute manner.

Because unfortunately, given the topic, it's gonna happen again. The quicker future incidents can be snuffed out, hopefully, fewer of them will occur.

But as most women and girls will attest, it's still and always has been an uphill battle.