Neymar Wants to Be the Dude; Leaves Barça for PSG 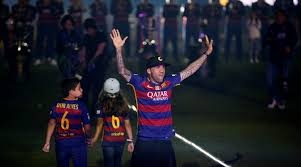 Barcelona thought it'd have another five-or-so years in it, though.

That's why they stuck a €222million buyout into Neymar's latest contract.

After all, who'd be crazy enough to pay that price, not to mention take on a post-tax salary of €45million plus all the accompanying bells and whistles?

Rumors about Neymar leaving Camp Nou had been circulating for quite some time now, but no one ever truly believed them.

And why would they? Who'd do that sorta math?

Monaco's a tony club, but their top wage earner on their roster was Portugal's João Moutinho, drawing a mere €75,000 a week.

Especially when PSG takes the domestic title for granted and sets its sights on the Champions Cup.

It's not just the big names, either, but they do set the market. Unknown players being bought for excessive fees and a friendly El Clásico are just two more examples of it.

Yes, Neymar's a prodigy, but who's ultimately gonna pay his bill? Who else?

In this case, Jean Q Fan:

So now he's off to break ankles in France.

One can only imagine what will be paid for the next phenom to come along.

And what of the two 30-somethings on the now-defunct MSN line? (Eat it, Microsoft™.)

How do Messi and Luis Suárez feel?