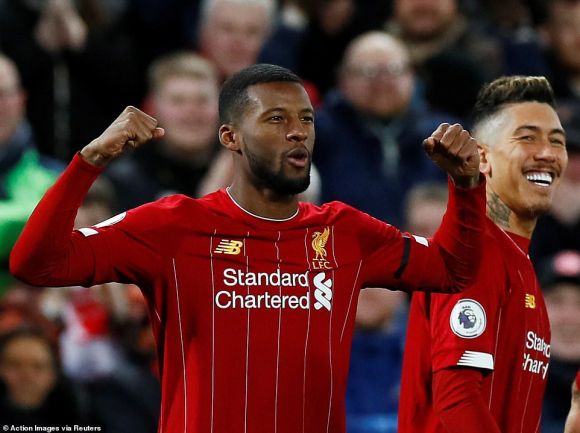 It's not gonna make any lists of inspirational quotes, but this match proved you can just toss your jocks on the pitch and wind up with a victory.

Especially when you're Liverpool in the friendly environs of Anfield, hosting hopeless and relegation-zone denizen West Ham United.

One woulda thought the Reds woulda bore down to post this 3-2 result since it equalled the Premiership record for winning streaks, 18.

Indeed. If not for a couple of horrendous misplays, this verdict coulda easily gone to a determined Hammer crew that may have been on the wrong side of most match stats but had a shot at sneaking outta town with at least a point.

West Ham keeper Łukasz Fabiański had a busy night, but that's not how he'll remember it:

If ever there was ever any doubt that lotsa stuff has to go right for fodder clubs to simply remain in the Premiership with its lucrative payouts and all, this dispelled it.

On the other end of the spectrum, give credit to the 'Pool for prevailing on a night when they were far from their best. Manchester City surely appreciates this, as it's their record winning streak being matched. Still, the fact dudes showed no edge at all was surprising.

Next up for the Reds is a Sat 29 Feb fixture with Watford at Vicarage Road, another club facing the drop that's already pulling out all stops to avoid it.

Liverpool will be odds-on to break the record as well as continue its two-season-and-counting quest to exceed Arsenal's 49-game unbeaten string. As usual, there are challenges at both ends of the Premiership standings this time of year.

Some are just more tense than others.