Liverpool and Arsenal Singe the Nets with 10 Goals, 9 Shootout Hits 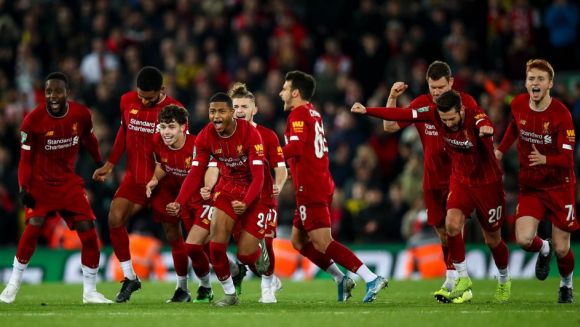 The stats say Halloween is trending in the UK.

If so, Liverpool and Arsenal got a head start on the proceedings.

These two big brands teamed up to do more trick-or-treating than their respective goalkeepers could handle.

Ultimately, though, The 'Pool's 20-year-old Caoimhín Kelleher handled one more penalty shot than Emiliano Martínez after a wild 5-5 goalfest, meaning the Anfield faithful went home numb but happy after he prevailed in the 5-4 shootout.

Keep in mind, this is the Carabao Cup, which isn't exactly a top priority for the Premiership's elite. As such, it's an occasion where the young dudes get a bit of a run.

Maybe the competition is low-priority, but the League Cup sponsor is certainly high-energy.

Sir Winston Churchill once said that the Americans and English were a common people divided by a common language, so the Yanks may need to be advised that bonkers isn't necessarily a noun on that side of the Atlantic.

Liverpool's youth was served when 18-year-old Curtis Jones drilled the shootout winner, but each side had a cagey veteran holding this wild night together:

The goals came in all forms, with Liverpool's last coming from Origi in the 94th minute to set up the penalties session. By then, it's a miracle someone was still counting:

The question now is whether Jürgen Klopp would commit to playing the quarter-final match his club earned after this escapade.

Liverpool's got a rash of matches surrounding the next round, including a Club World Cup fixture in Qatar and, of course, its Premiership obligations.

Dude's got a point when he says enough's enough. Reserves or no, his roster needa a bitta proper rest every so often.

Odds are the Carabao crew will accommodate him and move that quarter-final clash to the first full week of January. That's when the semi-finals were scheduled, but if they want to keep the Reds in the picture, that's the deal.

As the 'Pool's surely got more goals in them, they do it.