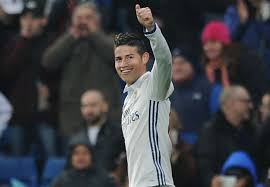 The youngster who took World Cup 2014 by storm has finally had his wish granted.

In a long-anticipated move, James Rodríguez has officially bid a goodbye to the Bernabeu.

Dude's been nothing but a liability at Real Madrid. No matter how well he performed or whatever brilliance he showed in the field, prevailing sentiment was he should've been doing more.

And that's why the Galacticos agreed to farm him out to Bayern Munich on a two-year loan that'll surely become a transfer at some point.

Dude's a wizard with the ball, to be sure:

It's not the German way, though, to go critter when a player finds twine, even in spectacular fashion:

This is definitely a new chapter for ther World Cup 2014 Golden Boot winner.

He's had his moments since then, and Die Roten are confident he'll have more.

Rodríguez will get his chances quickly.

The club's on its way to a two-week tour of China and Singapore, where it'll meet European luminaries Arsenal, Chelsea, AC Milan, and Internazionale.

Nothing like a road trip to do a bit of bonding.