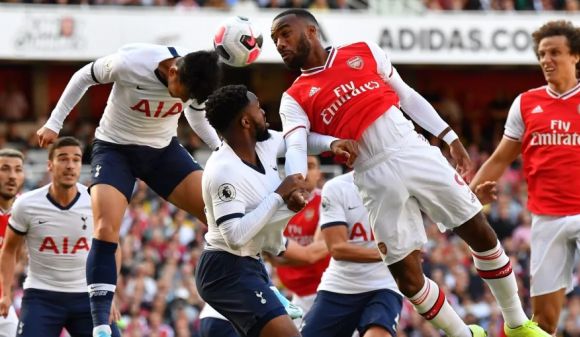 Every time a North London derby rolls around, exciting football is damn near a guarantee.

Tottenham seems to be at its creative best when Arsenal's in the house.

Same with the Gunners, but they've usually got the daunting task of overcoming both Spurs and their own defense.

That was the story yet again at the Emirates, where Tottenham dominated the first half but ended up being lucky to escape with a point.

Christian Eriksen and Harry Kane scored for the Spurs, while Alexandre Lacazette and Pierre-Emerick Aubameyang leveled for the hosts.

And David Luiz was all over the place.

Put them all together and the Gunners had to think they won this match, albeit with a 2-2 result.

Arsenal started the match exploring the pace of their front three, and the Spurs did well to defend themselves.

Once Tottenham did get an attack organized, Erik Lamela's finish from inside the area seemed to be relatively simple to keep out.

However, Luiz was somewhere else, counting the house or something instead of marking Lamela. So when goalkeeper Bernd Leno palmed Lamela's shot away, it fell directly into Eriksen's unobstructed path, and that was a bingo:

Duly chastened that this wasn't gonna be Luiz's day, Leno made up for it by taking matters into his own hands -- literally -- and making a series of difficult saves afterwards.

He kept Arsenal in it until the 40th minute, when Granit Xhaka fouled Heung-Min Son inside the area. Penalty to Spurs.

The HarryKane took it and perfectly struck it past Leno.

It looked like the first half would end up as all Spurs, all the time, but on 45+1, Nicolas Pépé found Lacazette,

With service like that, the Frenchman clinically popped it past Hugo Lloris:

Momentum shifted after the break, and the Gunners controlled large swaths of the match.

Dudes finally leveled in the 71st minute. Matteo Guendouzi's cross found Aubameyang, who did well to slice between the Spurs' defenders and zero in on Lloris:

Arsenal kept up the pressure and appeared to have tallied the winner, but the VAR ruled against a Sokratis goal, and the points were split.

Make no mistake, there are many positives to Luiz being on the pitch, and Udai Emery was the first to point out that he wasn't the only Gunner transgressor in this one. However, he put three defensive midfielders out there in case Luiz went walkies, and it still wasn't enough.

No doubt he'll be seeking more defensive help in the January transfer window.