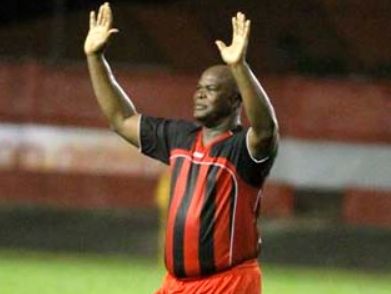 It was probably fun while it lasted.

But all good things must come to an end, especially when Concacaf can't take a joke.

That in itself may be the ultimate irony, but it's another topic for another time.

For now, that dubious crew's raised a red card on a noted paratrooper, drug lord, bank robber, guerilla leader, philanthropist, and vice-president of a real country. What makes it news is:

To say Ronnie Brunswijk -- in Dutch, the ij dipththong has a long-i sound; toss in the Germanic pronunciations elsewhere, and it's Br-uns-vike -- knows how to score is an understatment. He's sired 50 kids.

So despite the fact he's 60 years old, it seems he decided he still had something to offer on the pitch.

OG's club, Inter Moengotapoe, plays in Suriname's top tier, and after qualifying for the Concacaf competition, one woulda thought they were faring well enough as it was.

Right here, on the northern coast of South America ... In that small pond, then, one can say Brunswijk has made a big splash.

But then again, anyone can be a paratrooper, drug lord, bank robber, guerilla leader, philanthropist, vice-president, serial father, and owner of a football team.

However, it takes a special kind of arrogant to be on the cusp of one's golden years and pull this sorta rank:

So…the Vice President of Suriname, who is 60 years old, is PLAYING in Concacaf League against Olimpia tonight, captaining the team he owns. pic.twitter.com/Ktij4FiOoZ

Brunswijk did set a record for his 54 minutes of service. OG's now the oldest human to play in an international club competition. At least one of his sons is surely proud of this.

That'd be the son who started alongside him in Inter's match with Olimpia of Honduras. Not sure if that was the owner's/dad's call as well.

OG gave up the captain's armband with his side three goals down. Seems like his presence didn't make much difference. Inter wound up losing, 6-0.

That's when the long arm of someone else's law reached out and dropped the hammer.

Concacaf -- again, an outfit that knows disrepute -- decreed that Brunswijk had made a mockery of the game and needed his pee-pee whacked.

And that went for his precious team, too, with Olimpia nicked for just being there:

As if they had any say in lining up against Brunswijk.

Then again, maybe it's because Brunswijk was witnessed in the Olimpia changing room afterwards, passing out cash.

Not a good look.

Clearly, OG's sorta assholery isn't as acceptable as, say, that of someone who holds the top spot in a country ...

Or a wannabe who's the top repressor in his country:

Anti-vaxxers there must be living the dream. At least, those who are still living.

Anyway, now that Brunswijk's been shelved, it's time to find if he'll be even more motivated to gain his revenge through the national team.

Like most soccer in Suriname, Inter Moengotapoe have a strong politics tie, owned by the country's Vice President.

Here's my newsletter on how political changed influenced the national team's resurgence:https://t.co/hg5CQQUMBa

In the bigger picture, though, Concacaf's punishment mighta been a tad harsh. OG wasn't gonna play in any of his side's international away matches, after all.

Both France and the Netherlands have Interpol on his case for a longstanding drug trafficking conviction. He's not leaving home for guts or glory.

Better to stay a Big Dog than one on a leash. Someone's gotta mind the kids, after all.