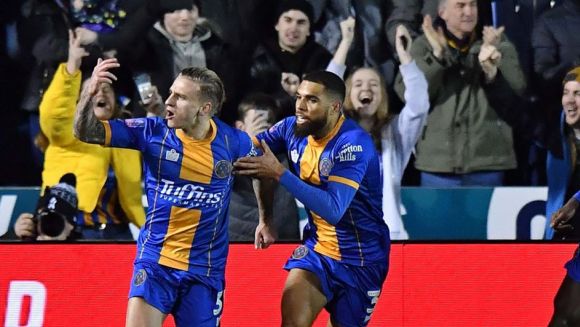 Like most of Europe, all you've gotta do is move a few miles in any direction to hear a different accent in whatever the home language happens to be.

Still, how the locals in Shropshire get Shrowsbry outta Shrewsbury must surely be put down to generations of enjoying 6.2% local ciders.

However it's said, they all blended together into a unified roar at Montgomery Waters Meadow this afternoon, though, as their unfashionable Shrews came back to square with Liverpool, 2-2, to live another day in FA Cup action.

OK, it was Jürgen Klopp's U23 squad, but all they care about in these parts is their colors were the 'Pool's and they nicked 'em for a replay, not to mention another budget-boosting payday.

Klopp's young dudes weren't exactly going up against any Shrews' version of a rope-a-dope strategy or anything. They just spent too much time -- and at 70% of the match's possession, they had the time -- to simply dick around with the ball.

It was good for a quick strike by 18-year-old Curtis Jones and a bitta unintentional charity from Salop defender Donald Love to open the second half.

Things looked inevitable until Jason Cummings joined the Shrews' cause on the hour. Dude wasn't exactly greeted with cheers for replacing local favorite Callum Lang, but he sorted those sentiments out in a matter of 10 minutes:

That's right. Klopp inserted Mohamed Salah and Roberto Firmino in the waning moments to show the kids how it's supposed to be done and avoid a replay, but Salah's egregious miss put paid to that thought.

Klopp says the U23s will get another run in the replay so his big guns can fully benefit from the Premiership's first-ever winter break.

Shrewsbury's firmly situated in League One's mid-table, so they'll have no such throttling. The FA Cup will be their season, just as it used to be for the big brands.