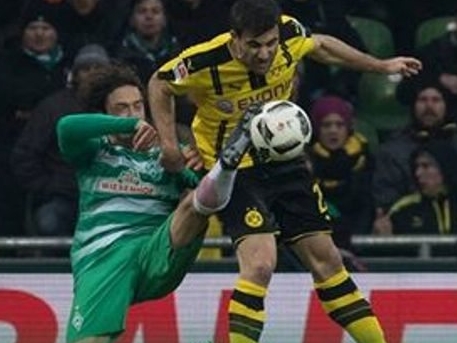 At the start of the Bundesliga season, expectations were that Borussia Dortmund would be a major storyline.

Der BVB were a traditionally feisty side that was committed to a talented group of young players, not the least of whom was the prolific American, Christian Pulisic.

For his part, dude hasn't disappointed., but he was about the only one.

And when stuff wears thin, there will be consequences.

Dortmund's last victory was all the way back on Sat 30 Sep with a 1-2 triumph at Augsburg.

Since then, they've managed three disappointing draws laced among five defeats. Today's 1-2 loss at the hands of Werder Bremen was the snapping point.

The final result flattered to deceive.

Dortmund didn't even register a shot until the second half. It was in the 56th minute, when Pierre-Emerick Aubameyang converted to counter die Grün-Weißen strike by Johannes Eggestein in the 26th.

However, even a lone point came to naught when Czech international Theodor Gebre Selassie delivered the dagger eight minutes later.

Dortmund chairman ... had announced that this was gonna be a must-win game.

Thus, it was clear to all afterward that the inevitable writing on the wall had been etched in stone.

Dutch manager Peter Bosz was informed that his services were no longer required by der BVB.

There will still be intriguing story lines in the Bundesliga.

Who's gonna win it definitely isn't one of them, but other than following individual fortunes of Pusilic and Aubameyang, for example, der BVB won't figure into them.