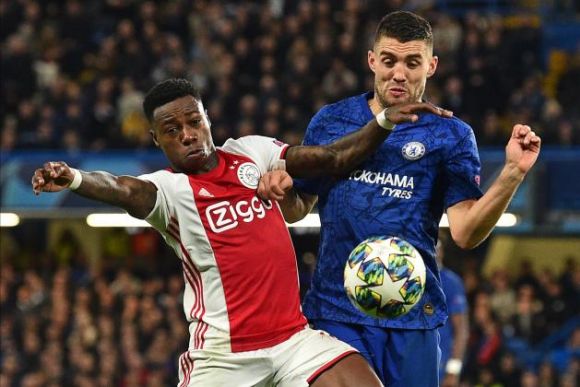 It's not nice to anger the replay gods.

Or at least attract their attention.

There Ajax of Amsterdam was, cruising at Stamford Bridge to the tune of a 4-1 Champions League advantage on the hour -- dreaming of doing a Johan Cruyff 2.0 -- when the all-seeing VAR suddenly dashed their fortunes to smithereens.

Within the span of a minute and change, both of the Dutch club's central defenders were red-carded, giving the Blues all sortsa space.

The result was a flurry of goals that drew the homeys even, thus gaining a big point in the Group H race by salvaging a 4-4 decision.

Until all hell broke loose, de Godenzonen -- Sons of Gods -- played like it.

However Ajax develops and trains -- and it's well-studied by others -- dudes come into matches with a clue.

Even after Daley Blind and Joel Veltman were simultaneously dismissed -- you'll see it -- Ajax kept buzzing the Blues despite being two men down.

The visitors had total control over this match until the weirdness happened.

Ironically, Chelsea thought their stretch of dominance bore more fruit -- as if they shouldn't have, being two dudes up -- until VAR denied captain César Azpilicueta after he launched his post-goal histrionics.

If the fans in attendance were to make sense of it all, they had to join the global audience by staying glued to the screen.

Speaking of the group ... Those were the ones in action on the night. The other half kick off next.

As tight as that table is, it seems the only reason Ajax hasn't put some distance from the pack is due to close monitoring by the electronic eye.

Chelsea would do well to join those who study the Sons of Gods system. Still, their defense may be soft, but at least all of it stayed on the field.