Barça Shuts Out Las Palmas and Its Fans 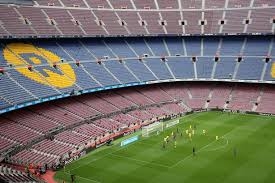 It's often overlooked that the nation of Spain -- like, say, Iraq -- is a collection of distinct regions with separate languages who aren't always in accord with each other.

The north's Basque independence movement and the violence it propagated serves as a sad example, and feelings still run deep.

To this day, Athletic Bilbao will only sign Basque players.

So the stage was set for conflict, and that's what happened.

What's more, FC Barcelona's opponent this day was Las Palmas from the Grand Canary Islands. They announced they would stitch the Spanish flag on their shirts for this occasion to show solidarity with the federal government.

All this combined to make for a potentially ugly situation, and Barça pleaded with La Liga officials to postpone the match.

This request was refused along with the warning that failure to play it would result in the Blaugrana being docked six points.

So, all they could do was close the doors and get on with the match.

The match was almost an afterthought. Barça all but treated it that way on the pitch, too, with  a 3-0 triumph.

It resembled a training session on FIFA 18.

The first have was scoreless, although Barça's midfield dominated. Deservedly, that's who finally led the breakthrough, when Sergio Busquets found net in the 49th minute.

Lionel Messi -- who was the supplier for the first -- turned finisher for the second when the home side expanded its lead in the 70th minute.

Looks like a training match for Messi, no doubt about it.

The Blaugrama master secured his brace seven minutes later, making this his best beginning to a La Liga season.

Too bad fans didn't get to see it in person.