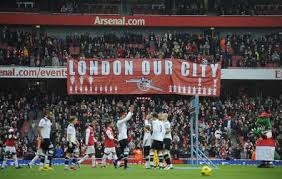 How the Gunners were underdogs going into the one is puzzling.

After all, Tottenham Hotspur have racked up only one victory in 12 Premiership visits to Emirates Stadium.

Was it Arsenal's 0-0 home draw with Red Star Belgrade in Europa League play two-plus weeks ago? That was literally the only match where they didn't collect all three points.

Granted, Spurs have been flavor of the month, but Harry Kane still hasn't looked like he's totally recovered from his hamstring injury.

Spurs, as it turned out.

As in yielding a pair of Gunner goals that seemed like a no-brainer before the match and became a done deal after the match in a 2-0 victory.

Besides, it was about damn time Shkodran Mustafi showed up on the score sheet.

Dude finally rose to the occasion in the 36th minute:

That's what soccer technical directors call a perfect header after a perfect cross. It must be why they cash large paychecks.

Then, a mere five minutes later, Arsenal’s superdude, Alexis Sánchez, burst to the scene to double the their pleasure:

Defeating their arch-rivals and Sánchez scoring.

What else could Arsene Wenger want?

That may already be happening.