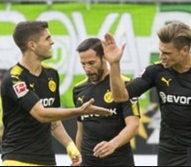 There's absolutely no doubt FC Bayern will do its version of the Borg again this season.

They've already broken from the gate this season with their latest footballing iteration of Göthe's Sturm und Drang by surgically dismantling Bayer Leverkusen, 3-1, in a match that wasn't that close.

More ominously, Die Roten did it while missing five starters.

But there's no harm in trying, and it looks like that's what Borussia Dortmund intends to do.

In recent times, Der BVB takes a run at unseating the München Machine more seasons than not.

If today's spectacular showing was any indication, hopes will be high yet again in the Imperial Free City.

And leading the way in Dortmund's 0-3 pasting of Vfl Wolfsburg was the young American prodigy, Christian Pusilic, who opened the scoring and later helped close it with a precision pass:

Toss in that brilliant curling strike by Marc Bartra, and it's no wonder some think this could be a season to remember for more than off-the-pitch issues.

It'd just be tragic if that dosh drama sucks in the 18-year-old American international.

Either way, Dortmund fans -- and likely players, too -- have circled Sat 4 Nov. That's when FC Bayern comes to town, complete with Neymar, whose incredible transfer terms sparked the overheated market in the first place.

If the Borussians can hold form that long, this will certainly become the Bundesliga's match of the year.