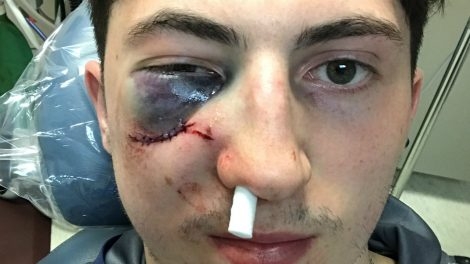 When a hockey player goes down and stays down, it's usually a cause for concern.

That's because when it happens, something's seriously wrong.

There are very few other reasons for their not at least getting to the bench. It's a sorta code among them.

Clean hit, by the way, and in the regular season.

Then, every spring, when the playoffs roll around, there's something about the lure of Lord Stanley's chalice that subjugates both pain and the specter of it even more.

Case in point this season: Zach Werenski of the Columbus Blue Jackets.

After a breakthrough season, coach John Tortorella's charges are now fighting for their very playoff existence.

Dude returned to the game, stitches and all, but eventually had to be pulled because his eye was so swollen, he couldn't see with it.

Pittsburgh went on to edge the Jackets, 5-4, in overtime. That gave the Penguins a 3-0 first-round series lead.

Afterward, upon closer examination, doctors who specialized in treating mere mortals insisted Werenski was out for the season. Unless Columbus protects home ice tomorrow night, that may be only one more game.

With so much on the line, don't be surprised if a certain Blue Jacket hits the ice wearing Groucho glasses and a mustache.

Dude's a hockey player, and this is for the Cup.