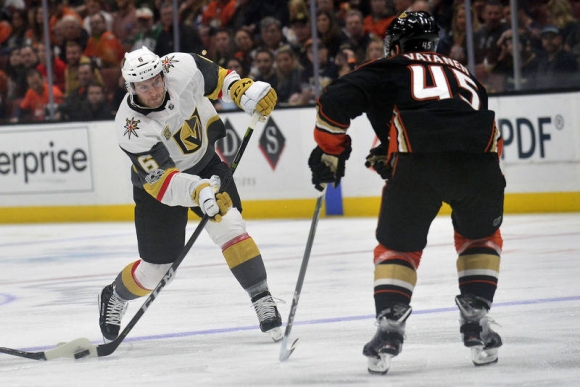 Odds are, sooner rather than later, the NHL's gonna add another expansion club.

That'll finally balance its conferences at 16 teams each.

Whenever this happens, the two items of note are gonna be:

The Vegas Golden Knights have reached the quarter pole of their inaugural season by claiming first place in the Pacific Division.

Needless to say, unless they hit some serious skids, the Knights have a shot at achieving the most successful first-year record in North American major sports history.

The Knights' surprising climb to the top rung has been made possible by an 8-1-0 home record.

It's probably a safe bet that Karlsson is the only Swede whose nickname is Wild Bill.

That had nothing to do with the Ducks drafting him 53rd overall back in 2011. He made it to the big team three years later and was traded to the Columbus Blue Jackets near season's end.

They're the ones who made him available to Vegas for the expansion draft.

Knights coach Gerard Gallant switched Karlsson to center, and he's been living up to his nickname ever since.

That included his scoring the first shorthanded goal in club history:

So far, GM George McPhee's team-building plan is coming together.

McPhee and Gallant have already made this club one of the season's main storylines, not to mention how many new fans they've made in yet another metro area where hockey had been a niche sport.

If the Knights can avoid a plague of injuries -- they're depth is understandably suspect -- this crew just might make history, realizing their stated objective of making the playoffs this year.