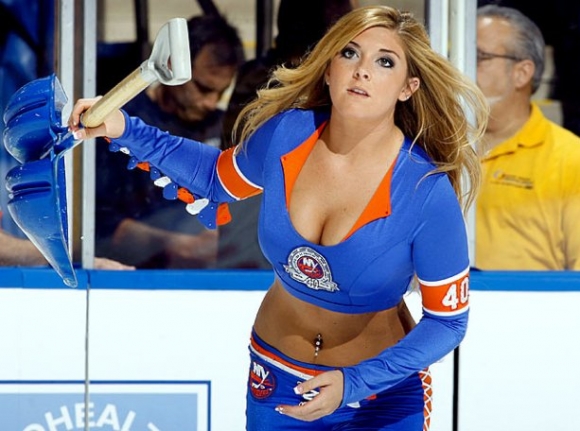 With Barnum & Bailey shutting down, looks like this is the best we can do for a traveling circus.

The New York Islanders' original home in Nassau -- where they created one of the NHL's great dynasties -- was so dilapidated by the time they left for Brooklyn, it was rightly called the Mausoleum.

True, the Barclay's Center is also on Long Island, but that's about all it has in common with the club.

It wasn't breaking news that the arena would suck as a hockey venue.

Somewhere in the move, Gary Bettman & Coterie found a crew of stat-cookers who made it look like the Isles had a good shot at attracting their fans to games before they commuted home from work.

That was never gonna work, and anyone who ever mingled with the great unwashed in Nassau woulda known it. Here's how a few of the hardcore fans reacted when the move was announced in 2015:

Not to put too fine a point on it, but when the Isles landed in Brooklyn, if they didn't realize they were in a non-traditional hockey area once the footprint expanded  beyond the Barclay's Center immediate surroundings, most others did.

So, who's surprised that the club's been looking around again?

Neither they nor the Barclay's Center wants to extend it. The opt-out will happen in January.

And with the Nassau Coliseum renovation reducing the number of seats well below the NHL-mandated minimum, an Isles return is now out of the question.

So, off they go to the latest alleged des res, Belmont Park, to a site adjacent to the famous race track.

Still on Long Island. Still gonna be a challenge.

However, of the three bids submitted by yesterday's deadline for proposals, the Isles probably like their chances.

It'll be months before all is said and done, but if it happens, they'll be within a half-hour's drive from Nassau and that much closer to their fan base's real roots.