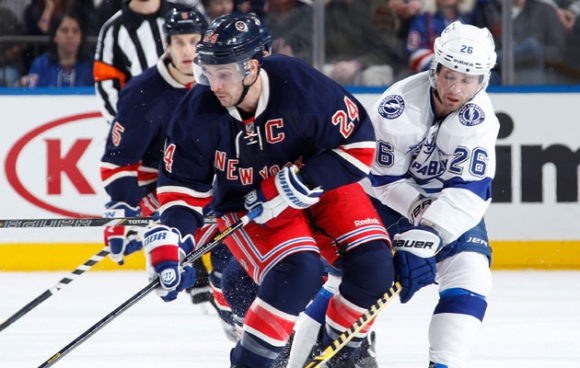 No other sport ascribes a captaincy with as much prestige as the NHL.

The role is even assigned an honored status within the game's rules. There can only be one captain per team, and he is the first line of diplomacy when dealing with referees. Only when he is off the ice do his lieutenants -- the alternate captains -- assume that authority. His leadership and authority can extend beyond the game itself.

Mark Messier, for example, had the last word on menus for team meals and even organized social functions. Given that he remains the only captain to lead two different teams to the Stanley Cup, nobody ever argued.

And that's why it can be an earth-shaking development when a captain is traded.

It's happened twice this season in the run-up to the NHL's trade deadline at 3pm est today. First, Steve Ott accompanied Ryan Miller to the St Louis Blues, and now Ryan Callahan is on his way to the Tampa Bay Lightning because he and the New York Rangers management couldn't come to an agreement on a new contract.

Thus, it's only fitting that Callahan was exchanged for another captain in Martin St Louis, the still-speedy veteran who couldn't get over being left off the initial Team Canada Olympic roster by his own GM, Steve Yzerman, when the Red Wings legend served in that capacity for the gold medal winners.

But the horses were already out of the barn.

The always-classy Yzerman honored St Louis' request to go to New York. In so doing, he took an untenable situation off Rangers' GM Glen Sather's hands.

As EJ Hradek noted in the video, the move makes great sense for the Blueshirts from a pure hockey standpoint, as they need more scoring if they're going to cling to a playoff spot. But the fact still remains. Two teams had the heart and soul ripped out of them today.

They each have 20 games left in the regular season to adapt.