The Senators Needed an NHL 100 Classic Right About Now 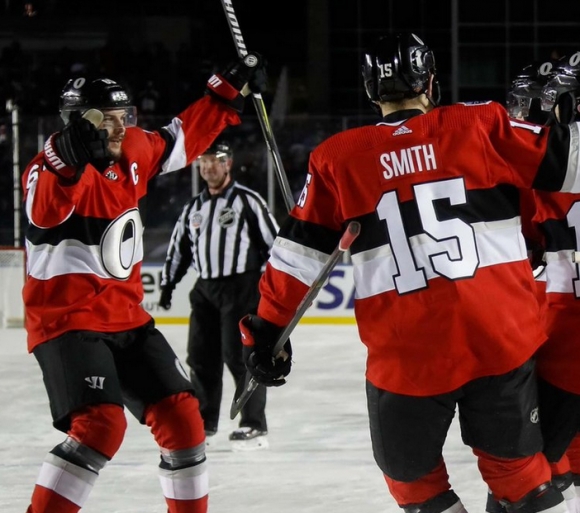 It's been a long, long year for Ottawa.

Who'd ever have thought that a Canadian team couldn't sell out a playoff game? That happened to the Senators last spring.

Dudes are currently eight points adrift of a playoff spot and -- worse, really -- only 6-5-5 at home.

That's not the stuff that builds hockey fever, considering the locals have to trek into the suburbs -- Kanata, about 20km/12.5mi from downtown -- to catch a game.

It's no surprise that the unfiltered Mr Cherry has an opinion on it:

Well, it's not an isolated opinion that they're not drawing because owner Eugene Melnyk hasn't exactly helped his own cause.

Hearts and minds aren't gonna be changed by whines and threats. They can't be hearing Kyle Turris -- their former No 1 center -- making comments like this:

And they're not gonna have much sympathy when the coaching staff who led the Sens to the playoffs last season got turfed because Melnyk wasn't all warm and fuzzy with them.

Maybe Melnyk didn't, but at least the fans got into the spirit of celebrating the 100th anniversary of the first NHL game  when the Ottawa Senators fell to Montréal's Canadiens.

They finally got their revenge.

The temperature dipped down to -25ºC/-13ºF, but a capacity crowd of almost 34,000 fans stuck it out at TD Place Stadium, home of the CFL RedBlacks.

Nary was heard a discouraging word, either.

That's because most Canadians aren't just hockey fans. They know what good hockey looks like and when a club's managment has made poor decisions.

Melnyk would be better served to change his attitude about how important a downtown arena would be to the Senators.

Then, someone should remind him that nothing in Ottawa has changed since the franchise came to life in 1992. He knew the situation there and chose to take the reins.

If things are working out in Canada's capital, it's on him.