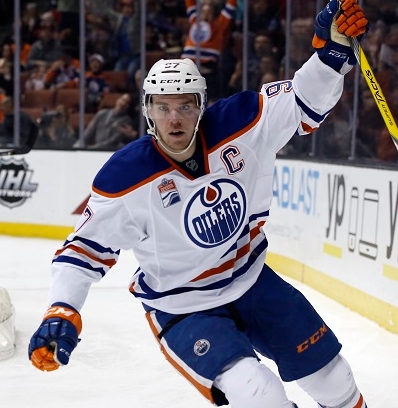 Last year at this time, the Edmonton Oilers were doing what they'd done for quite some time.

They'd finished last -- again -- in the Pacific Division with a 31-43-8 record. However, new coach Todd McLellan was fine with that.

At 70 points, the Oil had improved by the equivalent of four wins over the season before. McLellan's charges had learned his system and were showing signs of living up to the hype that four consecutive top overall draft choices engendered.

Dudes are indeed there.

This season's Pacific Division standings were satisfying in more ways than one, as McLellan's Oilers finished above the team that'd fired him and then gone on to the Stanley Cup finals.

Further satisfaction was attained in the playoff's first round, when Edmonton took out San José in six games.

So, for anyone in the eastern regions of North America who haven't been staying up late, this question's been answered:

They're in the second round, after skating into Anaheim and taking a two games to none lead over the powerful Anaheim Ducks,

The home team may have put on a show of precision passing, but the well-traveled Cam Talbot put on a better show of hot goaltending, with the help of a post or two:

Connor McDavid had an assist in the first game and was held off the scoresheet in this one, but he had Anaheim's attention all night.

With his speed, stickwork, and shot, that's not a surprise.

If the Ducks don't answer that question in the next few games -- as well as solving Talbot and an entire roster that's dialed in -- they could well have an opportunity before leaving Alberta to do what the Oil have done that far north in daylight savings time:

The young Oilers, though, have other plans. Seems like they've learned McLellan's past two seasons' lessons well.