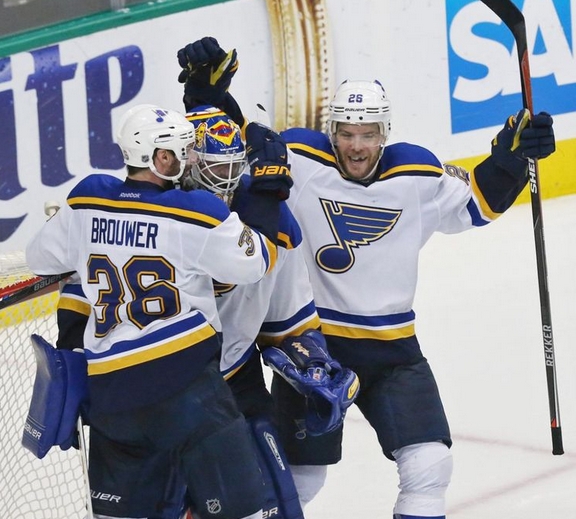 The Christmas break is not only family time that was negotiated into the current Collective Bargaining Agreement, it's supposed to allow players a chance to recharge their batteries.

Doesn't always work. Either that, or some clubs have supercharged rosters.

Not so the St Louis Blues and Dallas Stars.

But their divisional rivalry should add a bitta pep to their step this Fri 29 Dec.

Both pf these teams stumbled outta break with losses to Central rivals:

St. Louis has won five straight meetings, including 3-0 on Thu 7 Dec and 4-2 on Opening Night with Vladimir Tarasenko scoring in each game.

Tarasenko, though, has only three of his 15 goals in his last 17 contests and hasn't scored in the last five games. Brayden Schenn was living in it during the early going:

He's still holder of team-highs with 17 goals and 40 points but has only one goal and two assists in his last eight games. Dude's struggling without linemate Jaden Schwartz (14 goals, 35 points) as are the Blues, who are 3-6-0 since Schwartz went down with an ankle injury.

What's more, Paul Stastny (seven goals, 25 points) has only two assists in his last eight games and is -5 during that span, dropping his team-worst rating to -8.

Tyler Seguin increased his team-high goal and point totals to 18 and 34 after scoring in each of the Stars' last three contests, recording four goals and an assist during that span.

Jamie Benn (15 goals, 33 points) has continued his consistent play with four goals and five assists in his last nine games. And to hockey players, their sweaters are thicker than blood:

Defenseman Marc Methot -- who needs one assist for 100 in his career -- was to return to the ice over the weekend after missing 23 games with a knee injury, but he's still out for this one.

I like the Blues to get the road win in this one because of their far superior defense, which ranks third in all of hockey in goals allowed (2.5 gpg).

Dallas is ranked in the middle of the pack at both ends of the ice. I think Benn and Seguin are going to struggle to find good shot attempts against a St Louis defense that has been well and truly stingy this season.

I predict a final score of St Louis 3 Dallas 2.

Aspiring to become the Mark Twain of sports writing, Josh has been labelled as the up-&-coming sports writer of the year by absolutely nobody and the new heavy hitter in sports handicapping by his mother.