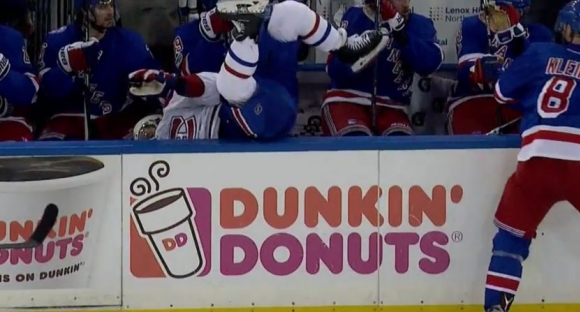 The NHL playoffs rarely, if ever, disappoint.

The early stages of the 2017 installment have been no exception.

For example, the New York Rangers and Montréal Canadiens are getting quite nasty in their first-round series.

The opening game provided a lovely precursor, as the two teams incredibly combined for 98 hits.

Somehow, Montréal emerged from that chaotic scene with a power play, causing a bit of justified confusion:

It doesn't have to make any sense.

This brings us to Game 3:

That was just a casual meet-and-greet between Torrey Mitchell and the entire Rangers bench, courtesy of Kevin Klein.

It was mighty thoughtful of him, although these types of formal introductions would be more appropriate either before or after the game.

Mitchell and his teammates had a hearty laugh after that one, but the NHL playoffs are certainly not a joke.