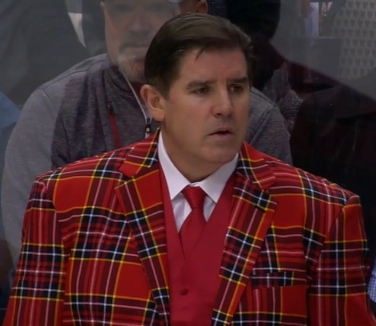 It's a fairly common practice in pro sports these days to schedule a theme on certain road trips.

Manager Joe Maddon of the Chicago Cubs, for example, has made this his trademark.

Recently, the Nashville Predators dangled a Christmas theme as an objective to spice up the intensity of their three-game western Canada swing.

As if the Preds weren't intense enough already.

Dudes are in the thick of the race for best overall Western Conference record, so every point is precious.

That meant everyone decked their halls, as it were, for the Dallas trip:

And the coaches were more than into it: Perhaps, though, dudes peaked too early in their excitement.

They proceeded to lose their following two games at home, to Winnipeg and Carolina.

And then, in full Christmas splendor, Pierre Laviolette and staff observed from the bench as the Preds got their bells jingled in a 4-3 shootout loss:

Next year, maybe they'd better consider keeping in the mood by donning the all-time most awesome Christmas hockey sweater: And don't give a damn who's naughty or nice.